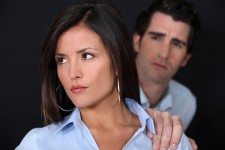 Differences don’t have to turn into conflict.

Linda: It’s an old saying, but it’s still true, that when it comes to relationships: “differences are inevitable, but conflict is optional.” Differences have to do with varying points of view, styles, or tendencies. Conflict results when one or both partners attempt to coerce another to adopt their perspective. We are drawn toward people who are different from us out of our innate drive to experience wholeness. As many of us have noticed, the existence of these differences often activates anxiety that can show up as judgment, anger, or the impulse to control.

What drives conflict is always fear. Conflict can only exist if two people are engaged in an adversarially based relationship. If we are having conflict, that doesn’t necessarily mean that we have an adversarial relationship, but it does mean that in that moment, we are acting as enemies who are seeking to avoid some kind of loss or gain something for which we are competing or both.

When we relate to each other as opponents rather than partners, the escalation of our mutual fears turns differences into conflict. The trick is to de-activate tensions before they escalate, and one of the best ways to do this is to intervene early in the process, before things go from bad to worse. As soon as one person becomes aware of having that “uh-oh” feeling, tell the truth and acknowledge without blame or shame about what you are feeling. Simply describing our feelings will go a long way towards relieving tensions and allowing you to communicate with more openness and authenticity.

Statements like: “I’m noticing that my chest is tightening up and my breathing is shallow.” “I’m afraid that I might say something that makes things worse rather than better so I’m feeling reluctant to speak.” “I’m feeling hurt, angry, scared, sad, etc. and I’m not saying that it’s your fault. I’m just telling you in the hopes of staying connected and not disengaging from each other.” “I notice that I’m wanting to strike out at you verbally right now and I’m telling you that so that I’ll be less likely to act it out.”

The obvious theme that runs though these examples is that they each exemplify a willingness to be vulnerable that shows up in a willingness to make “I” statements rather than “you “ statements. The more we can focus on our own experience rather than our partner’s the less threatened or defensive they are likely to feel, and the more open and receptive they are likely to be during the dialogue. There are of course, may other ways that we can defuse tensions and create a better climate for the resolution of conflict, but maintaining a tone of respect and openness in the dialogue is essential to a productive outcome.

If we are unable to prevent differences from turning into conflict, the next best thing is to disengage from battle mode without disengaging from our partner. Stephen Levine calls this “keeping your heart open in hell.” If this isn’t possible, the next best thing is to make a peace offering by saying something designed to reassure our partner that you are willing to make a sincere effort to create better understanding. We can seek to find out what our partner needs in order to feel better about the situation. We can resist the temptation to verbally strike back when we feel hurt and instead acknowledge that “that hurt” if they say something that causes pain. Such vulnerability can be disarming.

Admittedly the dropping of defenses that vulnerability entails is much easier said than done. But over time, the practice becomes more natural and effortless and ultiamtely contributes profoundly to an environment of trust and safety. Some other guidelines that will support effective conflict management include the following suggestions:

These guidelines aren’t a guarantee that we will prevent differences from turning into conflict, but they will help us to stay on track when we get that sinking feeling that ”Here we go again…” Like every other skill, the art of successfully navigating the terrain of relationship differences is crafted over time and begins with a shared intention. There are no short cuts and there are inevitably moments of frustration, disappointment, and distress, but these too will pass. All good things have their prices and in the case of healthy relationships, the benefits so far outweigh the costs.