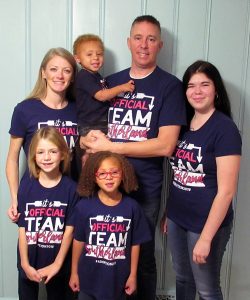 William came to live with the Sutherlands as an infant. His sister, Abigail, joined the family a few months later, when she was 5. Two years later they will become official family at Adoption Day Ceremonies in Hamilton County Probate Court on Friday, Nov. 1.

Stephen and Elizabeth Sutherland will adopt them. They will join Stephen’s children Kaitlin, 16, and Annabella, 7.

After some struggles and developmental delays, William has become a “loving, joyful child.” “He is super smart and inquisitive,” Elizabeth said. Abigail is energetic and exploring her limits. “She is a daredevil,” Elizabeth said.

Kaitlyn, who was already a big sister, helps a lot with the kids. Annabelle is excited to officially become a big sister with the adoption and remembers when her baby brother William came home from the hospital.  Abigail became a big sister to her biological brother William when she came to live with the Sutherlands and has gained a lifelong friend in Annabelle, who is only six months older than her. 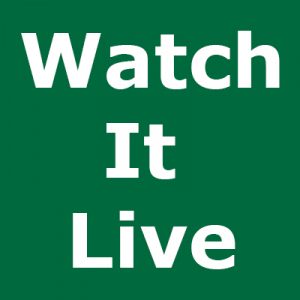 Elizabeth, who has no prior children, is thrilled to become a forever mommy with the finalization of the adoption.

Like most adoptive families, the path to family was long and meandering.

Elizabeth was very involved in anti-human trafficking mission work for about five years prior to the couple getting a license to foster children.

“During that time, we learned that a high percentage of children who are trafficked inside the U.S. were in the foster care system at some point,” Elizabeth said. A speaker told her if she really wanted to make a long-lasting impact to combat trafficking, she should become a foster parent or adopt to help at risk kids grow up in stable homes. That, combined with her strong desire to become a mother herself, and the fact that God placed another foster family in their life, paved the way.

“It was very gradual over several years leading up to the point where we accepted kids into our home,” she said, “but our desire to adopt them after meeting them was there right away.”

The couple is happy to complete their family but admit it has not always been an easy path.

“Being two working foster parents with a ton of appointments and visitations during the day was nearly impossible and incredibly stressful,” Elizabeth said. “Bringing my son home from the hospital and going right back to work because of not having parental leave as a foster mom was incredibly difficult. Watching our daughter grieve the loss of her previous life and relationships is heart wrenching.” The couple has felt isolated and has struggled to find support and respite care to give them a chance to recharge.

But they continue to adjust and grow. On Friday, they will celebrate being an “official” family.

The ceremony starts at 9 a.m. Friday. You can watch it live.