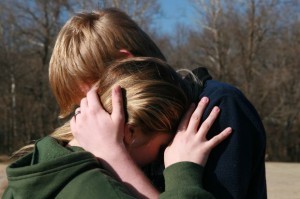 Charlie: On the verge of my fortieth birthday, I was going strong and fulfilling my life vision. I had a loving marriage, three beautiful children, a large comfortable home, a good income, and work that I loved. I was on the fast track to success, leading personal growth seminars all over the country and enjoying the good life. The thrill of the attention of being in the spotlight and the excitement and stimulation of the training room made the days and sometimes weeks at a time that I was away from home seem worthwhile. I told myself that I was one of the fortunate few who had the opportunity to do this cutting edge work and that of course, certain sacrifices did have to be made. Unfortunately, Linda didn’t seem to appreciate the “realities” of our situation. She would all-too frequently tell me what it was like for her and the kids with me on the road so much of the time.

My response was usually to encourage her to “be strong” and “use this experience as a growth opportunity” and “be a good example to the kids.” I would also occasionally acknowledge and appreciate Linda’s efforts to hold down the fort in my absence. I said these things not just because I believed them (although I certainly did), but also to take the edge off of her suffering so that she could do her job more effectively and stop complaining to me. I also helped out a bit when I was home, with some of the domestic responsibilities and did some child care in the hopes that these contributions would make a difference. Yet it wasn’t enough. Linda didn’t seem to be willing to “get off of her resistance” to our “situation” and over time I began to lose patience and become more critical and upset with her for failing to “get with the program”. I began to see her as a whining child who was refusing to grow up and accept responsibility without complaining. After all, I reasoned, “I am”.

Linda’s ongoing message was, “It’s not working.” Despite increasing evidence to back her up, my basic response was: “Handle it. Can’t you see I’m busy?” I wasn’t just busy, I was gone, so I couldn’t  get involved in our kid’s fights, to help them with their homework, to attend their swim meets, or to go to school meetings and hear about their behavior problems.

Then on the Saturday before my fortieth birthday, it all finally came apart. In a final effort to save our marriage, Linda had arranged for us to attend a couples’ retreat. I grumbled, but she made it clear there was no way we were not going. I agreed to go primarily to indulge her, but I also knew that it was time. Most of the twenty couples at the retreat were in varying degrees of pain and there was what felt like a great deal of uneasiness and awkwardness as we all milled around the first night waiting for things to get started. It was strange to be in the student’s seat in a workshop. Stripped of the protection of my facilitator role, I felt vulnerable and exposed, unprotected. In the opening session I felt apprehensive, almost panicky, anticipating what I knew I couldn’t control.

When it was our turn to share, Linda almost immediately dissolved into a pool of tears and before I knew what was happening, the facilitator invited us both into the center of the circle. We sat facing each other. I grudgingly reached out to take Linda’s hands at the request of the facilitator. I wanted to be anywhere else in the world than in the middle of a circle of people who would soon be witnessing the pain, anger, and shame that we had been dancing around for God knows how long. We were invited to speak. Linda went first. Looking into my eyes, as though we were the only people in the room, she spoke of her loneliness, of her fear that we might not make it, her concern that the kids weren’t getting the time that they needed with me, and the exhaustion that she was beginning to feel crushed by. Having others bear witness to her pain enabled Linda to open up. It also helped that for once, I was listening, really listening to Linda, rather than trying to “fix” her and tell her what I thought she needed to do.

I heard her as if for the first time, and it didn’t feel good. In fact it felt horrible. No wonder I hadn’t wanted to let her words penetrate into my awareness. Somehow I knew that the truth from which I had been distracting myself and denying would be overwhelming if I really let it in. In a last ditch effort to keep her words out of my awareness I made a feeble attempt to rationalize my position, defending myself and justifying my actions, even though I heard the hollowness in my own voice as the words came out. The facilitator heard my defensiveness and gently, slowly, restated Linda’s words looking straight into my eyes with what felt to me like deep strength and incredible compassion. I felt disarmed. The walls I had so carefully constructed were beginning to crumble and there was nothing I could do to stop it.

Then to put the icing on the cake, the group leader invited the men in the room who had been in my shoes, to describe their version of my scenario; to speak about what they had experienced when their day of reckoning finally came. One by one they spoke, many through tears, of how fortunate I was to be in a position to salvage my marriage and family before it was too late. They spoke of the visits with their children, of how different it was than when they were living together, of how they wish they had known then, what they had to learn the hard way, and if they did, they probably wouldn’t have gotten divorced. They spoke of how empty the pursuit of success and wealth is compared to the experience of living with a loving partner in a loving family. I had known these things on an intellectual level, I had been teaching these values for years, yet somehow hearing these men share their stories was like hearing it for the first time.

It went straight in to my heart and cracked it all the way open. I felt myself becoming flooded with emotion, as if a huge dam had burst. The images of the missed and lost experiences of my life flashed before my eyes. It was too late to watch our daughter take her first steps, too late to comfort our son when he fell off his skateboard and knocked his tooth out; too late to hold my younger son when nightmares woke him in the middle of the night. All this time I had been struggling to make Linda OK with a situation that wasn’t working for her. I was trying so hard to get her straight, when I was that one who needed straightening.

My focus was so much on Linda’s experience and that of the children that I never saw how much I had missed in the process. It felt like I was experiencing years of denied losses at the same time; years of denied loss, condensed into one very long moment that felt like it would never end. I felt myself drowning in grief, down for the count. I saw how disconnected I’d been from the people I said I loved more than life itself. I saw that their complaints, their rebelliousness, their non-compliance, their arguing with us and each other were all cries of pain, cries for help, cries from their unmet needs that had gone unattended. I had justified everything to myself with the rationalization that I was doing my part by building my career and providing income for the family. And of course there was just enough truth in that justification for me to buy it and to sell it to others. The problem was there was another huge truth to the equation that I was not including, and that was the cost of the so-called benefits.

I broke down like I never had before in my life and wailed like a baby, my sobs coming from a place deep within myself that I felt was bottomless. I cried for the lost unretrievable moments, the grief and the guilt. I cried for the countless others who like so many of the men in this room share this experience. But I was also crying tears of gratitude, or relief, of joy, as I kept hearing the same phrase being repeated over and over again in my mind: “It’s not too late. It’s not too late.” After what seemed like hours, I looked up at Linda who also had tears streaming down her face and through the tears she smiled at me and she looked more beautiful to me than ever. There was a moment of silence as we drank in each other’s presence. I was the first one to speak. I don’t know exactly where the words came from, but there was absolutely no question they were true: “It’s over”. The nightmare was over.

Two days later I gave notice at my job and we began the recovery process that would eventually help us all to heal from our collective and personal pain. Our wounds contain the seeds of our healing and are ultimately our greatest source of strength. The loss of my income, ego gratification and my sense of personal identity were the inevitable costs of finding and reclaiming my integrity. Letting go of my false self enabled me to find the peace I craved, free from the compulsive need to prove my value as a man through my work. My recovery from work addiction helped me to see that my issues were not unique to me. I was able to put things into a perspective that enabled me to recognize the cultural, social, and institutional factors that contribute to the dysfunction that showed up at home and in the workplace. That awareness diminished my feelings of shame and enabled me to take responsibility for doing the work I needed to do without taking it all too personally. The day that things fell apart was, to paraphrase Charles Dickens, “the best of times and the worst of times.” It was a painful ending and a blessed beginning.

It was a time of alternately and at times simultaneously experiencing deep sorrow and great joy. I was brought to my knees in humility and in gratitude. Whatever it is that brings us to our knees can only be called “grace”, and the transformation of the human heart from brokenness to wholeness is the result of that grace. And that is amazing. Amazing grace.