An Unforgettable Lesson in Forgiveness 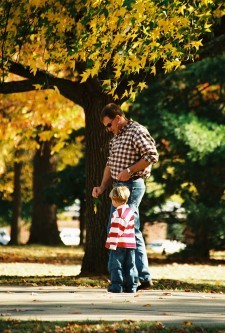 From out of the mouths of babes.

Charlie: Recently, I attended my grandson Devin’s Little League game, something that has become one of my favorite things to do these days. I sat on the sidelines in my lawn-chair enjoying the game with Devin’s parents Cassia and her husband (my son) Jesse and Devin’s younger brother Ashton. One of the things that four-year-old Ashton and I like to do is to wrestle and roughhouse together. I’m usually careful not to let things get out of hand but accidents sometimes do happen, and yesterday one did. I was on the grass on my hands and knees and Ashton was jumping on and off my back. The third time he jumped on me, he fell off before he could steady himself and hurt his back. He was in pain and since he hasn’t (yet) learned to stifle his pain and withhold his tears, he cried and freely called out how much it hurts’. His mom hurried over and we both tried to comfort the little guy. I felt terrible, not just guilty for not preventing the mishap, but because if there’s anything more painful than seeing your own child in pain, it’s seeing your grandchild in pain. And what hurts even more than that is feeling responsible for having contributed to his pain.

Fortunately, the injury was minor and in a few minutes Ashton had stopped crying and was laughing at some funny noises that I was making and the incident was history. After Devin’s game ended we all walked back to the parking lot together. On the way I apologized and told Ashton that I was sorry about what happened. He looked at me and said, “That’s all right, Poppa. I forgive you”.

I was blown away by his words and by the obvious sincerity with which they were uttered. I checked with Cassia who told me that she and Jesse hadn’t ever spoken much about the concept of forgiveness with Ashton and hadn’t ever instructed him to forgive others.  Ashton however, being the highly sensitive and empathic person that he is has always been very attuned and responsive to others’ feelings and emotions.

I have always believed that left to our own devices, we humans are inherently compassionate and empathic and don’t need to be commanded to apologize, forgive, or act respectfully towards others; that is unless we are forced, coerced, or threatened to do so by parents and other authority figures who were themselves directed to speak those words, and in so doing, have lost with their own capacity for empathy.

The incident served as a powerful reminder and affirmation of my trust in an essential aspect of what is hardwired into all human beings. By this I don’t mean that I believe that we should unconditionally trust everyone or that everyone is fundamentally trustworthy, but rather, that when we defer to the wisdom of our heart, rather than to our judgments and mental constructs, we can see beyond our conditioned mind and into a deeper level of truth. Perhaps that’s what was meant in the bible where it is written: “Truly I tell you, unless you change and become like little children, you will never enter the kingdom of heaven.”

Forgiveness, as many of us have come to know is not given exclusively for the benefit of the forgiven, but for the benefit of the forgiver. Letting go of a grievance or past injury doesn’t just help to alleviate the other’s guilt, but the offering of forgiveness is itself redemptive in that it relieves the giver of the emotional weight of that resentment. It’s been said that carrying grudges is like taking poison and expecting it to kill someone else.

When we recognize that trying to punish someone with our resentment is not only futile, but it is ultimately harmful to ourselves, the impulse to do so begins to diminish. At that point, the inclination to forgive, for most of us, arises naturally and we can more freely assess our situation. In doing so we may become more able to understand the underlying factors that have contributed to our situation, and release ourselves and the “offender” from the weight of our resentment.

Forgiveness is a process, not an event. It doesn’t occur in a single moment, but rather over time, and often not as quickly as it did for Ashton. Perhaps if we were all more able to see the world through the eyes of a little child, it would.