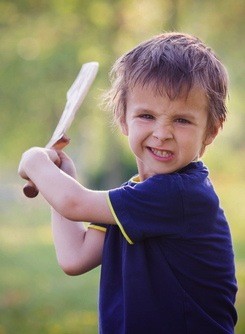 Why do some children lash out? Why do they throw things around the room, yell at the people they love and smack those who they rely on?

Most parents feel inadequately prepared to cope with anger problems because they never had anger management training. They hate it. They are afraid of it. They feel threatened by their children’s anger outbursts. They fear that their inadequacy to help their kids “fix” their anger might be exposed. So many seek to suppress their children’s anger, not for the child’s sake but for their own. They must shut their children up for their own self-serving ego. Their attitude is, “What will everybody think,” as if others’’ opinions are more important than their own children.

During your childhood, like every other human, you take everything personally. The human judgment center is in the prefrontal cortex, which does not fully develop until humans are in there late adolescence. Since the brain has not been fully developed, children will always jump to the conclusions that everything is about them. Kids think they are responsible for everything, “me, me, me, always about me.” Yet, nothing other people do is because of you. It is because of them.

When you were a kid, if you do a good thing then you think that you are a good kid. You were taught to seek out praise from others to find reassurance, to reduce self-doubt, to make sure that you are doing things right. Yet, you may have come to punish yourself for your perceived failure to live up to others expectations of what good enough is. You base your sense of self respect upon others’ opinions of you. You have learned to live on others terms. This mindset has become an automatic, unconscious habit.

You may have tried your best, with your developing brain, to make sense out of the events in your life. These explanations are often pushed on you by people you love. Therefore, you come to believe that since they love you, they would not be hurtful unless it was true. The end result is that as an adult, you continue to think the worst about your own abilities based on these early lessons, emotional reflexes, automatic thoughts, and distorted perceptions of your life.

Now as parents, we may become furious and shout things like, “Don’t you dare talk to me that way” or “You better not get angry!” or “You better stop or I will give you something to be upset about.” Ironically, some parents try to teach anger management by screaming in their children’s faces or, worse, hitting them with a belt for being angry! This is how some parents get control through intimidation. They use strong words, tone or behavior to show dominance. This is done to push children into submitting. As a result, kids are taught that they have an emotion they are not supposed to have, so they suppress their anger. The children of such parents may grow up to have physical problems such as high blood pressure and ulcers. They will be prone to such emotional problems as depression, anxiety, eating disorders, addiction, and obsessive thinking. These problems, taken together, will shorten their children’s life spans and diminish their quality of the life. These disorders could have been avoided if the children were taught to manage their anger, not suppress it out of fear.

Parents can teach their children how to manage this normal, but unpleasant emotion. You can use the word “angry” in a sentence, “I don’t blame you for being angry,” or, “I’d be angry too if I thought…” You are not a threat or your children’s enemy! You are on their side! When you validate their anger, you are validating them. You are giving them permission to have the emotions they have.

In addition, you can choose to replace blame with regret. Regret is the wish that things were other than they are. But they aren’t. This thing happened, and it’s regrettable. We can live with the regret that they are less than perfect. Saying “I’m sorry that it happened” is a statement of regret. Like when someone passes away, we say “I’m sorry for your loss.” This doesn’t mean we take ownership over causing their loss, but it means we regret their pain. It’s a sign of personal strength and self-respect. You can be a hard working employee who is punctual and loyal, but you get laid off. You can be a caring and thoughtful partner, but still get your heart broken. You can be a careful driver and check your mirrors and put your turn signal on, but someone hits your car. In all these situations your efforts were commendable, but the outcomes were disappointing. Yet, you are worthwhile either way. Self respecting people learn from their mistakes. Your children are not guilty of a crime. It’s not a crime to make a mistake. It’s not a matter of assigning guilt, fault and blame. It is a matter of human imperfection.

There is no way to prevent imperfect human beings from being imperfect. You can take reasonable precautions, but beyond a certain point, your good intention to ‘prevent’ becomes counter-productive. Your children, like all humans, have limitations and make mistakes. They do not have control over things that have not happened, nor can they read others’ minds to know what would really please someone else. The point is that when someone criticizes them, it’s not personal. Blame is for the blamer, to relieve their own pain and frustration for not getting what they want.