Can you see the big picture? 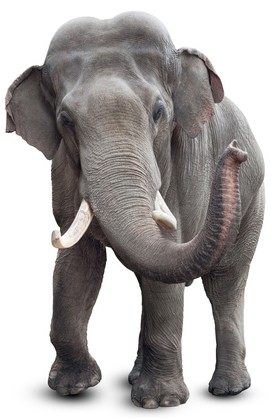 In the farthest reaches of the desert there was a city in which all the people were blind. A king and his army were passing through that region, and camped outside the city. The king had with him a great elephant, which he used for heavy work and to frighten his enemies in battle. The people of the city had heard of elephants, but never had the opportunity to know one. Out rushed 6 young men, determined to discover what the elephant was like.

The first young man, in his haste, ran straight into the side of the elephant. He spread out his arms and felt the animal’s broad, smooth side. He sniffed the air, and thought, “This is an animal, my nose leaves no doubt of that, but this animal is like a wall.” He rushed back to the city to tell of his discovery.

The second young blind man, feeling through the air, grasped the elephant’s trunk. The elephant was surprised by this, and snorted loudly. The young man, startled in turn, exclaimed, “This elephant is like a snake, but it is so huge that its hot breath makes a snorting sound.” He turned to run back to the city and tell his tale.

The third young blind man walked into the elephant’s tusk. He felt the hard, smooth ivory surface of the tusk, listened as it scraped through the sand, then as the elephant lifted the tusk out, he could feel its pointed tip. “How wonderful!” he thought. “The elephant is hard and sharp like a spear, and yet it makes noises and smells like an animal!” Off he ran.

The fourth young blind man reached low with his hands, and found one of the elephant’s legs. He reached around and hugged it, feeling its rough skin. Just then, the elephant stomped that foot, and the man let go. “No wonder this elephant frightens the king’s enemies,” he thought. “It is like a tree trunk or a mighty column, yet it bends, is very strong, and strikes the ground with great force.” Feeling a little frightened himself; he fled back to the city.

The fifth young blind man found the elephant’s tail. “I don’t see what all the excitement is about,” he said. “The elephant is nothing but a frayed bit of rope.” He dropped the tail and ran after the others.

The sixth young blind man was in a hurry, not wanting to be left behind. He heard and felt the air as it was pushed by the elephant’s flapping ear, then grasped the ear itself and felt its thin roughness. He laughed with delight. “This wonderful elephant is like a living fan.” And, like the others, he was satisfied with his quick first impression and headed back to the city.

The old man turned and went home, laughing as he remembered his own foolishness as a young man. Like these, he once hastily concluded that he understood the whole of something when he had experienced only a part. He laughed again as he remembered his greater foolishness of once being unwilling to discover truth for himself, depending wholly on others’ teachings. But he laughed hardest of all as he realized that he had become the only one in the city who did not know what an elephant is like.