Divorce As a Catalyst for Transformation 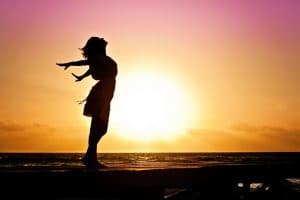 Linda: Dora was married for a year when her husband Sean left her with a ten-month old baby girl. She felt lost, lonely and terrified that she couldn’t make it on her own. Dora believed that she would be permanently stuck in her empty feelings of loneliness. Like so many others who experience such a rupture, it is typical at the time of separation and divorce to feel rejected, incomplete, lost, alone, flawed, confused, and broken.

When her husband left, she felt that there was no firm ground to stand on, and that her life was spinning out of control. Her anxiety was through the roof because she was struggling financially, coping with being a single mother, and was possessed by an irrational fear that Sean would engage in a custody battle over their daughter, to take her child away.

In the early months following their separation Dora was consumed with thoughts of being the victim of Sean. She fell into the victim trap, enraged that he was a perpetrator that had ruined her life, and obsessed with his wrong doings. She subscribed to the belief that she was the good guy, the healthy, evolved partner, and Sean was the bad guy, the unconscious one. She was able to accumulate a lot of evidence in her file to back up her belief. At first she didn’t realize that she was so exclusively focused on his shortcomings so as not to sink into depression and regret.

Feeling how chaotic her life was forced her to commit to a regular meditation practice. Dora’s determination to work with all of her intense feelings that swept over her prompted her to reach out for help. She got good support from family and friends to make some sense out of what was happening to her. With the assistance of her contemplative practice and a capable therapist, over time she was able to extricate herself from the victim trap. It was rather shocking to her to find that indeed, she had picked a partner with the same amount of wounds as her own.

It was only then that Dora was able to get her attention off of Sean to shift to doing her own work. With her newfound commitment to deeply examine her own unhealthy beliefs and patterns, she was able to utilize her ex-husband as a mirror to see those places in herself that needed healing. As she owned the shadow parts that she had projected onto him, her feelings of powerlessness lifted. She was able to see Sean more clearly as the sensitive, decent man she had married and chose to have a child with.

Once Dora realized that her divorce had a great deal to do with her own unhealed issues, she stepped on to a different path, one where she could take her part in the breakup. As she committed herself to uncovering her own shadow parts, she realized that the intensity of her anger at Sean for not being willing to work on their problems by going to a couples’ counselor was really because she had not been willing to do her own work. Her strong desire for marriage counseling had been motivated by her commitment to enlist the aid of a counselor to work on him. She admitted to herself that she wanted to change him.

In time, Dora was able to forgive Sean for the suffering that their breakup caused. In her own words: “All these changes were a profound transformation in my life. The period of grief following my separation and divorce was tough, but ultimately became a life enhancing experience for me. My divorce forced me to find work that I love and I proved to myself that I could be financially self-supporting. Rising up to a higher level of responsibility in general allows me to feel more powerful and causal in my world. And I now enjoy more peace of mind because I know that I have evolved and became a more compassionate, loving person.”