Do You Anticipate Failure? 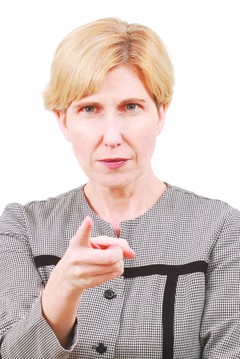 People who feel inadequate to cope with the adult demands of life usually feel discouraged and pessimistic. They predict failure for themselves, and their attitude becomes, “Why bother doing anything. I’ll only screw it up.” Since they cannot “Do it all,” they don’t do anything! As a consequence of this negative attitude, they come to feel overwhelmed by circumstances, trapped, powerless and out of control. They may give it a try, which to them means, “I intend to make an unsuccessful attempt!” After a while, they stop trying. They do nothing.

Tim is such a person. He may think about doing something, he may have fantasies of doing, but he doesn’t do. If he were to do something, it might be “wrong.” He might make a mistake. If he makes a mistake then others would judge him and everyone would know how “inadequate” he really is. This exposure could be humiliating.

He prevents this disaster from happening by doing nothing. This is his definition of control. He is “controlling” in a way that makes no sense in the real world. He is not in control at all, his life is out of control.

When life requires Tim to do something, to take a stand, he experiences anxiety. He anticipates failure. He often “solves” the problem and seeks to prevent “disaster” by saying, “I can’t.” We make the mistake of trying to “encourage” him by saying, “Yes, you can. Just try!” We do not realize that his definition of “try” is not the same as ours. We are not on the same wavelength.

Tim will defeat us and himself by “trying” and then failing, just as he had predicted. But it will not be his fault this time, the fault is on us because we had “unrealistic” expectations for him. He has punished us for our mistake. He is training us not to make that mistake again in the future. His discouragement is contagious. He has succeeded in discouraging us. We stop trying in our discouragement.

To Tim, life is just one unsuccessful attempt after another. He has little or no hope of succeeding. When Tim says, “I can’t,” he often means “I won’t.” We get into a power struggle over “who can make whom do what!” We mistakenly think that the issue is will power. It is not.

The issue is Tim’s discouraged withdrawal from the tasks of daily life. Instead of controlling Tim with our ‘help’ we can choose to use this “I can’t” occasion as an opportunity to foster change by asking a focusing question:

Counselor: “Tim, what are you afraid would happen if you were to try?”
Tim: “I’d screw it up.”

Counselor: “What’s the worst thing that could happen?”
Tim: “Everyone would laugh at me, they always do.”

Counselor: “When else have you felt that way?”
Tim: “I remember my teacher in first grade handing me back my spelling test. She said, ‘That’s pretty good, for a baby.’ Everyone laughed.”

Counselor: “You never forgot that humiliating exposure. That teacher discouraged you. You took her sarcastic remark personally, as if it were a reflection on your worth as a person.”
Tim: “Wasn’t it?”

Counselor: “No. It was just inconsiderate antagonism on her part. She was building herself up by getting a cheap laugh at your expense. But you are a grown up now, not a helpless six year old. Would you like to break the cycle of discouragement and start encouraging yourself?”
Tim: “Yes. I’m tired of it. But how?”

Counselor: “You can choose to do some homework in your own behalf. You can take responsibility for your efforts to pursue what makes you happy. Ask yourself: ‘ What am I trying to achieve? What are my choices?’ Then you can use your adult judgment to choose how much effort is required until you have done enough. By trusting your judgement for how much is enough, you must be willing to take the risk of not succeeding. The stakes will not be as high now as they were in childhood. You will be a worthwhile human being whether you succeed or not. It won’t be a reflection on your worth at all.”