Do You Believe in Miracles? Here’s Living Proof! 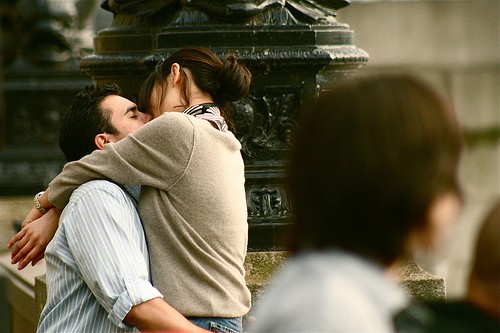 Mariah started life with what most people would characterize as a hellish beginning. The only child of two alcoholic parents who divorced when she was a little girl, she was raised by her bitter and staunchly Catholic mother. Her parents separated when she was two years old and she had no contact of any kind with her father after that time – no visits, letters, phone calls or birthday cards. It was her mother who absolutely prohibited any contact with him but Mariah never found that out until after her mother died.

Ron grew up in an abusive family in which he absorbed his father’s frustrations and rage that he was subjected to until he managed to leave home. Neither Ron nor Mariah were willing to even consider marriage because of their fears that they couldn’t trust themselves not to play out the patterns that they had witnessed and experienced in their own families. That is, until they met each other at the party in the home of a mutual friend.

Ron: “There was a strong connection between us from the moment that we first laid eyes on each other”.

Mariah: “As soon as I saw Ron walk in the door, I turned to my girlfriend and told her ‘Leave him alone, he’s mine’”.

And he was, and has been for the past 35 years. But as strong as their love for each other has been, it hasn’t prevented some overwhelming challenges from turning their lives completely upside down.

From that point on Ron and Mariah were nearly inseparable. Then two years after meeting each other, on Ron’s thirty-ninth birthday, Mariah was diagnosed with Amyotrophic lateral sclerosis (ALS) also known as Lou Gehrig’s Disease. After visits to several neurologists, all of whom confirmed the diagnosis, they asked what they might expect in the future. The answer was devastating: There would be progressively debilitating physical deterioration that would gradually weaken and paralyze Moriah’s entire body, beginning with her extremities. She would lose her ability to walk, talk, eat, and eventually breathe. Mariah would probably live two or three more years, if she was very lucky, perhaps as many as five. It would be a physically and emotionally painful process of degradation that would end in a slow death.

Knowing this, Ron did what any love-struck man would do in his position: he proposed to Mariah.

“I was deeply moved, incredulous”, Mariah told us, “but I couldn’t allow Ron to take on the care of a dying woman who had so little to give back.”

“I know that you love me Ron, and I love you” she told him, “but things have changed. I’m not who I was and this is not at all what either of us had in mind. I know that we are engaged, but I want to release you from our engagement. It’s really OK.”

But Ron refused to take “no” for an answer. He responded, “I’m as committed to you right now as I’ve ever been, even more, and nothing that you can say can make me change my mind. We’re in this together for the long haul, and it’s going to be long. We’re going to prove those doctors wrong, the ones who said that we’ll be lucky if we get three of four more years together. I’m not going anywhere and neither are you!”

Mariah: “Ron and I practiced what we called, “Sacred denial”, that is, we chose not to accept the doctors’ prognosis as a reality set in stone, but rather as an opinion about something that may or may not come to pass. We were committed to doing everything within our power to slow the rate of deterioration.”

Three months after receiving the diagnosis, Ron and Mariah were married. Their doctors were all in agreement that having a child was out of the question since the pregnancy would adversely affect Mariah’s health and potentially compromise her immune system. Plus, she wouldn’t be around to parent her child.

Mariah and Ron thanked the doctor for his advice and she got pregnant on their wedding night. Their son Luke, was born in July, 1982, followed by his brother Cole, born twenty-two months later. Both boys have grown into extraordinarily gifted, intelligent, and handsome young men.

As for Mariah, thirty-three years after her ALS diagnosis, she continues to live an incredibly full life in service to others as a teacher, psychotherapist, writer, and seminar leader. She offers workshops throughout the country and has supported the healing of thousands of people over the past three decades. Ron travels with her, handling logistics and acting as her primary caregiver and “interpreter” when she conducts workshops as Mariah’s ALS has diminished her ability to be clearly understood by anyone but him.

Mariah: “I’m so glad that Ron sees me as a woman and a wife, and not a patient or an invalid. And he’s always there; reliably generous, protective, and not a martyr.He speaks up when he’s unhappy and he has this authentic optimism. His attitude is always, ‘We can handle this’.

I’m very dependent upon him now and that is very humbling. I’ve always been an independent woman. I sometimes feel guilty that I have ALS, but there are fabulous lessons in surrendering to ‘Thy will be done’. I’m certain that I’m a better person for having ALS. I know that my experience has enabled me to help people become more resilient themselves and to grow in their ability to deal with suffering and loss.”

Toward the end of our talk we asked Mariah how she might account for having so completely shattered all of the doctors’ predictions of her expected longevity. Before answering, she paused and with eyes brimming with tears, turned towards Ron and in a shaky voice said, “It’s him. He believes in the power of love to heal. He believes in me. Without Ron’s continual, ongoing, loving support, I couldn’t be doing what I’m doing today. I know that I wouldn’t even be alive.”

More than any other couple we’ve ever interviewed, Ron and Mariah embody the principle that when two hearts are separated, all difficulties can seem insurmountable, but when they are united as one, nothing is impossible.