Enduring Happiness: Why is my Partner so Mean to Me? 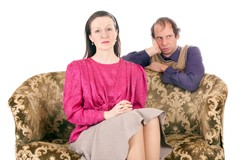 Greg came into his second counseling with the question – “Why is my wife so mean to me? Does she enjoy it?”

This is the wrong question because it puts the problem into the hands of another party. In effect, he is trying to figure out someone else’s motivations, which is something no one can ever do with complete accuracy. We have enough trouble figuring out our own motivations, how can we possibly know why others’ do what they do?

These questions place the focus on his wife, Susan. They are not about Greg. They put the responsibility for Greg’s worth as a person in Susan’s hands, not his own. This is a prescription for dependency. These questions distract Greg’s attention from those things he can control. For example, “What does Greg bring to his relationship that makes it so stormy and unhappy?” One way to get an answer to that question is to turn the problem on its head. Instead of wallowing in self pity because we don’t get what we want, why can ask ourselves, “How would my life be different if I got what I wanted?”

His answer, of course, was “I’d be happy.” However, we already know that Greg had never seen marital happiness in his childhood home. The closest he ever came to happiness was being hugged by his boozy parents who were using him for selfish purposes of their own. Their support only came with strings. Soon after Greg would be comforted, the evening fight would start. He experienced their rage at each other, and their mutual accusations and retaliations. He would be called upon to take sides and support one parent over the other. He hated that, but he found it exciting to get the attention at the same time.

Greg is learning that a high paying job and a pretty wife are not the bases for happiness. But if playing a successful role in the business world and then playing a dominant role at home is not a basis for happiness, what is? Do I buy a Ferrari? Do I move to Maui?” No. This is not happiness. Our wants are endless. As soon as we get everything we want, we will want other “things”. In addition, we cannot control external “things” because they can be lost, damaged or taken. So long as we rely on external “things” we will never be happy.

Enduring happiness comes from within. It arises internally. So to answers the focusing question “How would my life be different if I got what I wanted?” we have to know who we are! I am not a parent or a spouse, a sibling or a sales manager. These are merely roles that we play. That is not who we are. A better answer is, “I am me. I am passionate, loyal and generous. I am responsible, , hard-working and funny. I am competitive, smart, and sincere. That’s who I am.” By thinking about himself, Greg has begun the process of replacing his identity of roles and with an independent personality. This “knowledge” of himself is not merely intellectual, it is emotional, too.

Later that evening, Greg pushed his comfort zone again. When he came home from work, Susan ignored him. However, Greg had learned that he was confusing the absence of validation with invalidation, as if he were actively being declared worthless by Susan’s silence. He chose not to make that mistake this time. So instead of depending on her, Greg chose to acknowledge himself as a loveable person. He was a respectable partner whether Susan greets him or not. As a result, Greg has shifted from his old, unhappy role as an insecure child to an independent identity as a self-respecting adult. This gave him the courage to go on to push his comfort zone once again by telling Susan what he needs.

“Telling” is not demanding, or begging. It is not admitting weakness or dependency. It is an act of self-affirmation and a request for cooperation. Greg was able to say, “Susan I just want you to acknowledge my presence. It hurts me so much when you ignore me when I come through the door.”

As a result, Susan was able to talk about her own vulnerabilities and self-doubts. She felt inferior to men all her life. She didn’t feel worthy to validate someone who was superior. Greg didn’t dismiss her. He didn’t say, “Don’t be silly. You shouldn’t feel that way,” which is invalidating. Instead, he listened to his wife and said, “That sounds awful, that must be painful. I don’t blame you for feeling like that.” This reply had the powerful effect of both validating her as lovable despite her insecurities. No one had ever done that for her before. Susan agreed that Greg had a legitimate need to be acknowledged by his own wife, and she agreed to work on it. Greg reminded her that if she didn’t always succeed, it didn’t prove that she was a failure, it only proved that she was imperfect. Greg and Susan were not superior/inferior. They were equal members of the human race.

Susan was able to push her comfort zone too. When Greg came down to breakfast the next morning, she was able to say, “How are you feeling this morning?” When he finally got the attention that he wanted so much in the past, it seemed that he didn’t need it as much as he thought. It was pleasant, it was preferable to being ignored, but it didn’t really change anything. Greg no longer felt he had to get recognition to prove that he was a member of his own family or that he was loved. He already felt that way. As an equally lovable human being, he was good enough with or without the attention. He was able to accept himself. No one else can give that to him, and no one can take it away.