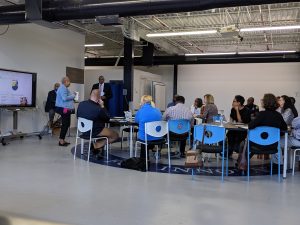 Gayle Foster of Hamilton County Health Department’s Infant Mortality Review Team spoke about here team’s efforts to provide emotional support to fathers in the event of a child’s death. She said that HCJFS Fatherhood Coordinator Calvin Williams is helping with that effort.

Wesley Bugg and Kevin Sherman of Reaching Our Brothers Everywhere, or ROBE, spoke about the group’s efforts to encourage and support fathers. The group focuses on decreasing infant mortality and increasing breast feeding. The presence of a father in the family does both those things. ROBE provides education and support to fathers to help them be a positive part of their families. 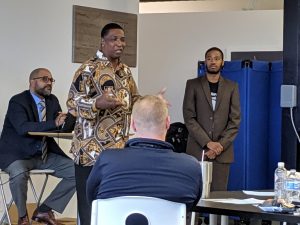 Kimberly Dent from the Ohio Commission on Fatherhood presented information and resources with collaborative members.

The Fatherhood Collaborative of Hamilton County seeks to create and sustain community consciousness, conversation and action on the needs and aspirations of fathers and their role in the development of healthy children and families.

It meets every other month. All members of the community are invited. The next meeting is from 1:30 to 3:30 p.m. on Thursday, December 19, 2019 at the Center for Innovation at Xavier University, 1605 Dana Avenue.