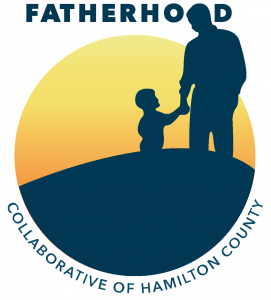 Members of the Fatherhood Collaborative of Hamilton County heard about a father who obtained better education for his daughter with some help from collaborative leader Calvin Williams. They also learned of county efforts to help fathers and families with emergency expenses.

Williams told of a father who contacted him through the collaborative. The man had gained custody of his daughter after her mother died. She was being bullied and her father wanted to put her in a better school. His frustration at navigating the system was working against him as he would sometimes get agitated and angry. Williams accompanied the father to the Cincinnati Board of Education office to see about changing the girl’s school.

The board of education worker left her desk for a bit and returned with documentation that the child was enrolled in the school of her choice and transportation had been set up as well. She told the father, who had worried about his anger getting in the way, “I wanted to do this for you because you were so nice.”

In this case, one family was helped, but Williams said the goal of the collaborative is to help all fathers overcome the hurdles that keep them from helping their family.

“Too many fathers who are ready and willing to be involved with their children are blocked from doing so,” he said.

Holt spoke about the Prevention, Retention and Contingency program at HCJFs that recently expanded to help families in need. A qualifying family can receive up to $3,000 annually for emergency expenses such as past due electric bills, car repairs and bus tickets.

Candice Tolbert, spoke about SuperSeeds, which works with schools to find alternative forms of discipline for school development. It teaches conflict resolution and other tools and resources for teachers, parents, and students.

SuperSeeds partnered with Lockland schools to be used as an alternative to school suspension. It takes children who got into trouble on a tour to the sheriff’s department, UC Medical Center, and the University of Cincinnati. Roughly 92% of children that go through the tour do not have any other disciplinary incidents.  If you have a program that can help SuperSeeds, please contact Candice Tolbert at (513) 543-4275 or email mailto:SuperSeedsllc@gmail.com.

HCJFS Family Services Manager Jermil Tarver spoke about the new kinship stipend program that provides financial assistance for families caring for a related child. The program aims to keep children with a family member whenever possible.

Williams also discussed Supporting the Fatherhood Journey: Findings from the Parent and Children Together Evaluation. The

The next meeting of the Fatherhood Collaborative of Hamilton County will be from 1:30 to 3:30 p.m., Tuesday, October 8 at the Center for Innovation at Xavier University, 1605 Dana Avenue.

Learn more about the collaborative at HCFathers.org.