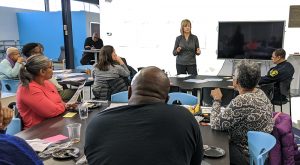 The Fatherhood Collaborative of Hamilton County wrapped up the first year of its rebirth on Tuesday.

Hamilton County Job and Family Services led an effort to reform the collaborative after a two-year absence. HCJFS Fatherhood Coordinator Calvin Williams spoke about the spirit of innovation that guides the collaborative, saying all ideas are welcome.

“You cannot withhold a value or thought if you want to innovate,” he said.

The featured speaker was Peg Dierkers of Bethany House Services. Bethany House is one of four agencies that serve homeless families in our region. The others are The Salvation Army, YWCA and the Interfaith Hospitality Network. Research shows that if a family is homeless less than 30 days, the children suffer less trauma, she said. So that is the goal. She said that as the economy has improved the type of families they see have changed. They generally face more obstacles.  “We served about 800 kids yearly,” shes said. “One-fourth of those have an identified disability and about one-fourth get diagnosed with a disability.”

She said many families face one-time situations that can put them out of home. A car repair, an illness, a need for furniture; any of them could push a family past the tipping point. She said recent changes by HCJFS to its Prevention, Retention and Contingency funding have made that easier. “Changes made earlier this year have been invaluable,” she said.

Cincinnati Police Officer Princess Davis spoke to the group about her work in the community.

“I call everybody my baby,” she said. “I don’t know any strangers.” Davis celebrates 27 years on the force in February. She said she considered quitting early on, but then she connected with the people she serves. “You’ve got to love these babies where they’re at and give them help,” she said.

Officer Davis said that Williams, in his previous role with Lighthouse Youth Services, was instrumental in helping men become better fathers and do better for their families.

The meeting wrapped up with a discussion of future goals for the collaboration.

The Fatherhood Collaborative of Hamilton County meets next on February 11. The location has not yet been determined.