Fighting Over a Lollipop: A Mindful Parenting Guest Post 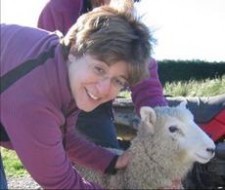 I’m so pleased to host Debbie Blicher on the blog today. Debbie is a writer and mother of two children, and one of the most thoughtful parents I know. My husband first read this piece on Debbie’s blog, Two Adopt Two, and suggested I post it on my Mindful Parenting blog, and he was right. There are many, many examples of mindful parenting in this great piece.

“GIVE ME BACK MY LOLLIPOP!” M yelled, chasing K across the parking lot to my car. It was 6 PM, the pickup from Hebrewschool. Dinner was getting cold at home.

“IT’S NOT YOUR LOLLIPOP!” shouted K, scrambling into the car.

The argument continued as they buckled in and I started the car. I usually stay out of their arguments, but the volume of this one was beyond my endurance. Something else bothered me about it as well, but I didn’t know what.

Tripping over each other, they explained that their teachers had given out lollipops as prizes in a vocabulary game, and each of them had had one, and K had started sucking hers when M snatched it out of her mouth and ran, and….

“So you stole hers even though you had one?”

“You each have one now?”

But the situation didn’t feel right to me. I don’t know whether the source of my discomfort was them or me. I did hear M tell K, “You hurt me when you tackled me!” and, like I said, I was already reacting a little too much to something unknown to me.

Anyway, as the next hours played out, I got more of the story, which they didn’t want to tell. K’s Hebrew teacher being more generous than M’s, K had always received more treats than M did, but she would never share. Therefore, M had for months been swiping her treats. Today, he grabbed her lollipop right out of her mouth and ran off with it. So she caught him, knocked him down (she denied this), and got it back.

How I wanted to think about this incident: It’s bad behavior on both their parts, but they settled it. M deserved what he got.

How I did think about it: K has always been too damn sensitive about food. She always makes M beg, and even then she won’t share. Yeah, she remembers food insecurity, but she’s old enough to start recognizing her feelings and thinking twice before pounding him over a lollipop. And M, G-d help him, has always thought stealing is funny. Well, I’ve seen too many adopted Russian boys go to jail for stealing…. And the Hebrew teachers have some really difficult kids this year–they don’t need this crap.

How I coped: I asked each child to do a “fix” with the other for the theft and the violence, and I asked K to do a “fix” with me for lying. (A “fix” is a formulaic apology designed to help the offender recognize how the offense affects the relationship; it involves working out a penance with the one offended. It comes from attachment disorder therapy.) I informed them that I would ask their Hebrew teachers not to give them food of any kind for the remaining few classes. And I added some extra words to our prayers: “I’m grateful to live in a place where there’s enough food, so we don’t have to steal. I’m grateful that you have kind Hebrew teachers who give you snacks and treats. I’m grateful that I know how to use words to solve problems instead of hitting.”

Both kids ended up in tears. I hate that.

1. I hate it when anyone–especially my kids–fights over something of which there’s actually plenty. That was what bothered me about the argument in the first place. I’ve seen actual starving children; I also have a painful history with food myself. I feel that the correct response to our well-nourished lives is gratitude. And yes, I have to keep an eye on my reaction to future offenses.

2. Nobody can prevent their kids from committing crimes as adults, but I’ll try anyhow.

3. I believe my kids can learn to recognize–and make choices about acting upon–feelings they learned long ago. I don’t believe they can unlearn the feelings, but I do think they can recognize their influence (the same way I will try to in #1). In other words, I don’t take “I’m an orphan” as an excuse not to try.

Deborah Blicher is an essayist, editor, and writing coach who blogs about adoption at Two Adopt Two. Her work has appeared in The Boston Globe, Calyx Journal, and PsychologyToday.com. She loves the way parenting continually surprises her.