Karen Rumsey, who worked in Family Services 2 until December 2014, was honored for her work with the Cincinnati Police Department’s Criminal Investigations unit. She was named Social Worker of the Year at the National Association of Social Workers, Ohio Chapter, Region 6, banquet.

“The Cincinnati Police Department would like to Congratulate Karen Rumsey of our Criminal Investigation Section on her being Awarded Social Worker of the Year at this evening’s National Association of Social Workers Awards ceremony. 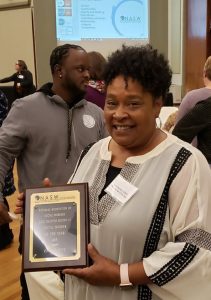 Karen and her amazing team work to support families whose loved ones are victims of violent crimes including homicide. Karen is often the lone light during people’s darkest hours.