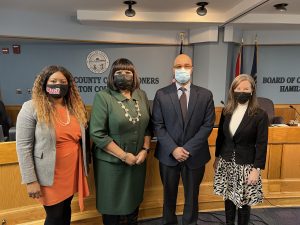 Hamilton County Commissioners voted today to approve the promotion of Michael Patton, who has worked for Hamilton County Job and Family Services since 1993, to agency director. He has held any executive roles, including leadership positions in Child Support, Children’s Services Program Support, Workforce Development and Public Assistance. His most recent title was Assistant Director for Child Support, Building Services and Fatherhood Initiatives.

“JFS is a large, complex organization that provides a lot of help for people in need in our community,” he said. “My years of experience have prepared me to take on this role. I’m ready to go to work.”

“We are so excited to have Michael lead our largest organization,” said Commission President Stephanie Summerow Dumas. “He has a passion for helping Hamilton County families, especially during these hard times, and he understands that our most valuable resource is our employees. Michael will be the agency’s first African-American director.”

“Today is historic. We are thrilled to have selected and promoted a qualified and seasoned professional who can hit the ground running to help the thousands of citizens and children in need,” said Commission Vice President Alicia Reece.

“We are confident that Michael has the skills and the commitment needed to carry out our vision of working collaboratively towards a community free of abuse, neglect, and financial need,” said Commissioner Denise Driehaus.

As the agency’s first African-American director, he is proud of that achievement and credits a list of previous HCJFS leaders who helped inspire and teach him. He hopes to help foster the same kind of mentoring for others.

The appointment is effective immediately. It comes after a months-long search that involved many interviews with county leaders as well as community stakeholders. He takes over from Amy Story, who has been interim director since August.

Patton and his wife, Bridget, have two adult children. She works as a community engagement and policy professional. He’s a University of Cincinnati graduate and a U.S. Army Reserves veteran, where he was a gunner and started his leadership career as a platoon guide.

HCJFS is the largest department within Hamilton County government, with more than 750 employees. It has served Hamilton County residents since 1947 and is one of few quadruple-combined public human services agencies in Ohio, meaning it provides public assistance, children’s services, child support services and workforce development. You can view a list of the services provided by HCJFS at hcjfs.org. You may also download application forms for these services there, as HCJFS was one of the first human services agencies in Ohio to make service application forms available online.

The format and/or content of this post has been edited to fit guidelines of the Cincinnati Chapter of United Resource Connection for this rebroadcast.