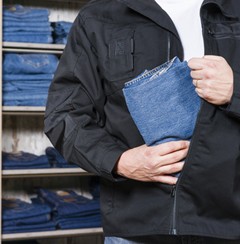 John came into his session with big news to report. John had been working to push his comfort zone and turns out he had more courage then he thought possible. He had been feeling discouraged about his job for some time.

Recently he took a risk and had a talk with the store manager that he had been putting off for a long time. John told his manager, a man who had been his boss for only a year, that he had stolen several things from the store a few years ago.

His manager was disappointed and insisted that John make restitution, which he did. His manager also expressed appreciation for John’s honestly, but warned him that another instance would result in his termination.

John felt immediate relief from the burden of guilt and responsibility he had been carrying. He had stolen things in the past because he felt his former manager was cheap. Of course, a better solution would have been to seek other employment, but pessimism closed that option. He could have asked for a raise, but his aversion toward asking for help prevented him from doing that too.

John didn’t understand why he stole. We explored how the motivation for his crime could be seen as antagonistic gestures. His choice to steal had two underlying purposes: to regain some sense of control to manage his powerlessness; and to relieve the pain of his suppressed rage from the unfairness of his employer’s victimizing.

These motivations were consistent with his mother’s mantra: “If you get anything, it has to be on your own.” John took this message to it’s logical extreme: “Do it on your own; take the law into your own hands if it comes to that. Don’t bother trying to secure cooperation. Do not look to others for help because you’re not going to get it. You are all you’ve got. The solution to the problem must come from you. If you ask for help, you are revealing your weakness for all the world to see.”

We might be tempted to say that John had deceived himself into thinking he was a) entitled to take things and b) entitled to exemption from the consequences of his actions because he had suffered.

Eventually, John’s guilt caught up to him and pulled him down. It did not begin with the crime. His guilt goes back to beatings where he was made to feel he had offended his father and deserved to be punished. He carried this guilt into adulthood. He confirmed this long standing aspect by committing a criminal act: “I was guilty then. I am guilty now.”

Calling this whole process “self-deception” does not add anything useful to our understanding of the dynamics in this situation. When we understand how childhood attitudes manifest as adults, the problem becomes solvable. We can: a) identify the early recollection in which the attitudes are embedded, b) offer a choice that can be accomplished in the present, c) validate the efforts made to push their comfort zone .

During his session John learned that his behavior was not out of character. It was entirely compatible with his pessimism. Specifically, it was consistent with his mother’s value, “If you get anything, it has to be on your own.” John had no hope of getting any financial help from his old manager, so he got it on his own. John thought to himself, “This is how you solve problems. This is all you can expect from other people. This is what ‘independence’ means. This is how people live in a dog-eat-dog world.” All of these unconscious values were derived from his mother’s never-forgotten advice.

John was able to see that his mother’s teachings had cost him dearly. He was angry at her and he was angry at himself for taking her advice at face value as if it made sense. He wrote her an anger letter and another one to himself, which restored his sense of self respect.

When self-respect is strengthened, feelings and behaviors change. There is no more need for self-serving self-deception. The individual can take life as it comes. John has earned the right to feel confident to solve problems and the right to be happy.