It’s All My Fault: Taking the Blame for Others 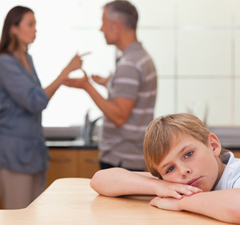 Jerome wanted to know why he still felt so badly about his parents’ divorce. He couldn’t understand it. He was ten years old at the time. He came to counseling to begin his search for the answer.

Therapist: “What is the worst thing about your parents’ divorce?”
Jerome: “It feels like it was my fault, like I should have done something to prevent it. I let it happen.”

Therapist: “Your answer tells me that you are feeling responsible for what happened. You are feeling guilty of the crime of ‘irresponsibility’. You feel guilty of failing to prevent this disaster and it’s too late now. You feel to blame even after twenty years. This creates a painful problem that you cannot solve and your failure to resolve it makes everything worse for you.”
Jerome: “How did I get into this mess in the first place? I had nothing to do with their problems.”

Therapist: “You can see that now as an adult. As a child, you were too close to it. You got caught up in it as any child would. All children have the feeling that they are the center of world. Everything that happened in your little world was somehow on your shoulders, and you felt you were doing a lousy job.”
Jerome: “Why didn’t I outgrow it?”

Therapist: “This perspective was developed at an early age and never questioned. It had a strong emotional impact. The powerful emotional events in our lives become strong memories. When a human experiences an intense feeling, hormones are released in what we call the fight or flight response. These hormones tell our body something potentially painful just occurred, so don’t forget it or let it happen again. So the hormones give a heightened significance to these emotional memories. As you grow, these emotional memories play a disproportionate role in shaping your personality, and makes you think, act and feel in certain ways. More specifically, as a child you compounded the pain of your parents’ divorce by taking it personally, as if your ‘failure’ to prevent it were a reflection on your worth as a person. You blamed yourself unjustly, as if you were guilty of a crime. You may have imagined that if you had gotten better grades or were quieter or were more loving, the whole thing wouldn’t have happened. But you didn’t, and it happened. As a result you lost your self-worth, and that was the most painful and damaging loss of all.”
Jerome: “What can I do about it now?”

Therapist: “You can choose to use your adult judgment to put this emotional memory in a more realistic perspective. You can replace your feelings of criminal guilt, deserving punishment, with regret. Regret is the acknowledgement of another’s pain, without taking ownership for causing or fixing it. When someone dies, we say ‘I’m sorry’. This doesn’t mean we caused the painful loss, rather it implies we wish that things were otherwise. You can choose to let go of your responsibility for what happened. You can relieve the pain of taking this loss personally by seeing yourself as unconditionally lovable. This is to believe your not inferior or superior, but are an equal member of the human race. However, there is still one more question to answer, are you angry at yourself for failing to prevent the divorce?”
Jerome: “Yes.”

Therapist: “Could it be that this lump of frozen anger is turning into the painful symptoms of worry and sadness that keep you from feeling happy with life?”
Jerome: “Yes, how can I do that?”

Therapist: “Can you write yourself an anger letter and relieve the pain of these pent up emotions.”
Jerome: “Yes, I can. I think it will help to actually do something about it in the real world. It would be liberating to let this go.”

Jerome wrote out his anger, at a time and place of his own choosing. He felt relief from the pain of his pent up grief, anger and discouragement. He wrote his anger out in front of him where he could see it and put it in a mature perspective. He wrote his mother an anger letter for breaking his heart and tore it up. He wrote his father a seething letter and ripped that one up too. He didn’t experience anxiety or guilt. It was all just terribly regrettable and sad. He called his mother in Las Vegas. They had a nice reunion over the telephone. It was the first time they talked in seven years.

At his next session, Jerome told me that his insomnia stopped. It was a symptom of his out-of-control anger, which made him feel anxious and unable to sleep. I explained that dreams are a way of solving unsolved problems. Before coming in, Jerome could not find ways to solve his anger problems from the past. He had dreams of a burnt out building with dead bodies on the floor. This was a pretty fair representation of his parent’s loveless, joyless marriage. There was nothing he could do to repair this fatal damage. The marriage was dead. It would stay dead.

Jerome’s solution was to let it go. The problem didn’t have to be solved. He was a grown up now. He could live in the present and solve current problems as they arose, just like everyone else.