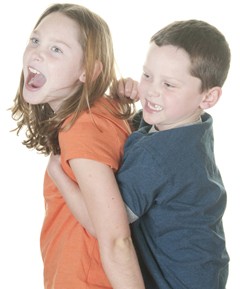 On January 5, I ran a guest post by my friend Logan Ritchie about how she responded when her son punched a friend. Yesterday, Hanna Rosin wrote a piece about mindful parenting for Slate’s Double X blog, in which she offered her thoughts about Logan’s post. I posted my response last night, and now I’d like to give Logan a chance to share her thoughts.

Hanna Rosin’s article on Double X this week states: “Modern parents are making themselves miserable by believing they always have to maximize their children’s happiness and success.” This is absolutely not my point. Kids struggle. Mine does it so deeply and internally that I want to celebrate the breakthroughs whenever possible. At times, a relationship with a child feels like a marriage. You’re in it for the long haul; your job is to support and listen; you have to maintain to sustain.

Then, later: “Like many mindful parents, Ritchie goes into the conversation with a fixed set of judgments. Rough-and-tumble play is bad. Talking about feelings is good. Wrestling club, probably out of the question. Earthwalks camp, excellent.”

This made me laugh aloud. She’s right! I do have ideas and thoughts about behavior. I DON’T want him to punch, I DO want him to learn right from wrong. If he grows up to be a professional wrestler instead of a college grad will I resist? Undoubtedly. Will we talk about it? Yes, because we learned how to talk to each other along the way.

Rosin continues: “[Mindful parenting is] merely another way of making sure our kids behave in an exemplary way, and we are always there to facilitate that.”

Not true. Being mindful, whether in adult relationships or with your own children, is a way of understanding motivation and reasons for acting a certain way. Carrying through on those feelings can draw those around us closer instead of pushing them away. Wouldn’t you rather a snippy friend call later to say, “Look, I was hungry and just found out my car was towed. I didn’t mean to take it out on you.” Or, your friend could punch you, never explain, and you’d be left feeling confused and turned off.

I’m no different than other parents, celebrating the small victories. Now when do we get to lay on the couch and eat chips?