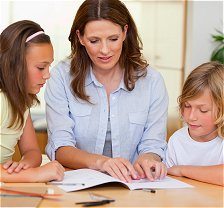 Maybe none of the above describes your situation. But you still feel utterly inadequate and unsure and panicked that you’re parenting all wrong.

Terry Matlen, an ADHD coach, author and mom to two daughters, vividly remembers regularly feeling overwhelmed just getting through the day. Even though one of her daughters has ADHD, both were hyperactive. She needed quiet and downtime. Instead her kids couldn’t stop moving and making noise.

Matlen had a hard time keeping the house clean and organized. “As [the girls] got a tad older, making meals that everyone would eat put me right over the edge,” she said. When they started school, Matlen found it difficult to stay on top of the endless paperwork.

For ADHD coach Dana Rayburn, the hardest part about parenting her now 18-year-old daughter, Aja, was her lack of consistency. Especially when kids are younger, consistency is king, whether it’s bedtime, mealtime or discipline. “I am so spontaneous and in the moment. It’s hard enough for me to keep myself on track let alone manage her as well.”

Suzi Highet, a divorced, co-parenting mom of two young kids, who has ADHD and OCD, also worries that she can’t provide the structure and routine her kids need. “Bedtime is particularly tough, when we’re all tired and our already challenged executive functions are pretty much shot.”

For Jennifer Smith (not her real name) the toughest obstacle has been convincing her three kids who also have ADHD that “their differences would eventually present themselves as gifts. As a young child, and even into high school, our youngest son was terrified of being ‘outed.’”

The challenges of parenting when you have ADHD can feel insurmountable. Thankfully, many things can help. Below, moms with ADHD share the biggest lessons they’ve learned.

Be honest. “By a fairly young age Aja noticed I was different from other moms,” said Rayburn, who provides productivity coaching for business owners and professionals with ADHD and group coaching for all ADHD adults in the ADHD Success Club. “And, I was always very honest with her about my challenges at whatever level she was mature enough to understand.” When she was younger Rayburn’s daughter did play on her distractibility and pull her off track, but today Aja is protective of Rayburn and one of her biggest cheerleaders.

Katherine Ellison, a writer who has two sons, also stressed the importance of being honest. As she noted, parenting comes with many minefields: “promises you make impulsively only to realize they are also impossible, things that fly out of your mouth that you hate yourself for saying, beating yourself up for your periodic utter failure to model calm organization.” Which is why she focused on being authentic and admitting her mistakes. “And that’s going to be worth a lot,” said Ellison, author of the book ADHD: What Everyone Needs to Know.

Get clear on your priorities. Rayburn’s parenting priorities are making Aja feel loved, safe and well-nourished. When Aja was younger, this meant rearranging her work schedule to volunteer in her classroom and attend all her activities, practices and events. “Where other parents would drop their kids off somewhere and leave, I always stayed. I couldn’t give her consistency, but I could give her my presence.”

Honor your tendencies. Because of Matlen’s sensitivity to noise and chaos, she spent a lot of time outside with her kids on things that helped them release their high energy—everything from the swings to a basketball hoop to a mini trampoline. When her husband watched the girls, she’d retreat to a quiet room. They also had a sitter for weekend date nights. What do you need? How can you honor and meet those needs?

Focus on solutions. “With my youngest, homework responsibilities turned into nightly war zones,” Matlen said. So she hired a college student to help, “because to me, my relationship with my daughter was more important that her school work.” That solution didn’t work out, so Matlen requested that all homework be done during school hours, which meant no more battles. What problems are you running into? What kinds of solutions can you create?

Keep things simple. Rayburn and her husband had a rule that Aja could only participate in one after-school activity at a time, such as gymnastics or Girl Scouts. “She had to choose. This was because I couldn’t handle more than one extra thing.” What can you simplify in your life, so you feel sane and supported?

Embrace your gifts—and capitalize on them. Having ADHD meant that Rayburn had to step back and let her daughter figure things out on her own. Which led Aja to become resourceful and self-reliant. “So many times when we were in the trenches of parenting I was afraid I wasn’t doing enough for her. Now, I see how strong she is. And, how she appreciates our trust in her and doesn’t abuse it,” Rayburn said.

Matlen capitalized on her creativity in all sorts of ways. She created a meal wheel, which the kids took turns spinning (solving “the crankiness at dinnertime when they hated what I put on the table”). For lunch, she made faces out of food, cut sandwiches into shapes, and used interesting containers. She’d also slip in silly pictures and sweet notes.

Both Rayburn and Matlen used their creativity and playfulness to invent novel, zany games. Matlen, also an artist and musician, used art and music with her kids.

Smith believes that ADHD has given her the gifts of empathy and intuition. Matlen also believes that having ADHD made her more sensitive to her kids’ needs and gave her a deeper understanding of their behaviors. Plus, she was able to help them solve their problems.

For Highet the self-acceptance she’s developed has been a great example for her kids. For instance, she never complains about her appearance or criticizes herself in front of them. “I might say, ‘Mommy is frustrated because I don’t feel like I did a good job.’ But I won’t call myself names or say I’m no good at something. And I tell them ‘we’re all good at different things.’”

Highet also helps her “kids discover who they are and celebrate that, rather than trying to make them into something they’re ‘supposed’ to be.” Smith has done the same. Her youngest son “nearly aced the LSAT but decided to put law school on hold to pursue a dream job in the tech world…I think he gets it now!”

Break the rules. Remember you don’t have to parent like anyone else. “I allowed for more TV time than I wanted, because if I didn’t have some quiet breaks, I felt I would fall apart,” Matlen said. “I allowed my super ADHD out-of-control child eat dinner in another room in front of the TV—it was the only way she could focus on getting food in her.”

Get help. Help can take many forms and include many types of resources. For instance, Matlen read parenting books and attended parenting classes to learn specific strategies for managing her kids. She attended CHADD meetings. “But what was most helpful was having someone come in to help me with the kids so I could get away.” Today, Matlen runs a free Facebook group for moms with ADHD.

Rayburn is Smith’s coach. Their work has been vital in helping Smith manage a year of wedding planning, home renovations and her husband’s frequent work travel. “The skills she has given me are incredibly useful for getting through every single day.” Rayburn also has been a “lifesaver” to Smith’s daughter who landed an amazing job, which includes not-so amazing administrative tasks.

Practice forgiveness. The biggest lesson Highet has learned has been forgiving herself and her kids— “remembering that I’m a wonderful, loving mom, and they’re doing just great.”

What’s also been helpful for Highet is hearing about other moms’ struggles and complaints. “They have struggles too, and mine aren’t worse; they’re just different.”

Ultimately, “Find ways to make things work for your particular family, even if they are unconventional,” Matlen said. “Learn to let things go and go with it instead of fighting every little thing that doesn’t seem to fit into the typical parenting pattern.”