Myth: Nothing Good Can Come From Conflict

Conflict, especially in relationships, has gotten a pretty bad rap over the years and for good reason. Unresolved differences are the source of an awful lot of physical, mental and emotional distress. Many couples have concluded that arguing and fighting is painful that it’s better to avoid acknowledging differences at all, and have co-created agreements (sometimes unspoken or even unconscious) to ignore or deny the presence of differences that could potentially activate hard or hurt feelings.

This policy may be an effective short-term strategy but it can have disastrous long-term consequences. When relational differences aren’t adequately addressed, there is a strong likelihood that withheld feelings will morph into slow burning resentment, ongoing frustration, emotional disengagement, depression, or worse. Dr. John Gottman, a world-renowned relationship expert, claims that a pattern of avoidance can be far more destructive to a relationship than the volatility that can sometimes erupt when couples find themselves locked in combative positions. Ironically, it’s often the desire to minimize or prevent damage to the relationship that motivates the impulse to ignore or deny differences.

While there’s no denying that “take no prisoners’ hostilities can be harmful, and should be avoided whenever possible, if the alternative response is also destructive, what to do?  Fortunately, these two options are not the only ones that are available. A third possibility has to do with engaging in what we refer to as “conscious combat.” Conscious combat is distinct from what is commonly knows as “fighting” in these ways: 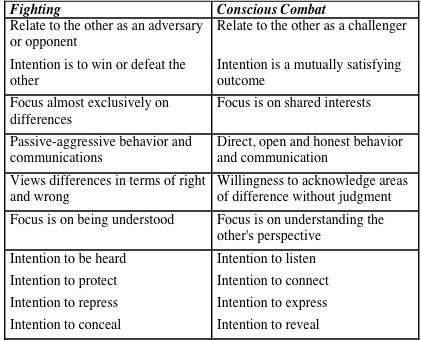 While conscious combat is much more likely to produce a mutually satisfying outcome than simply fighting, admittedly it is by no means an easy strategy to practice We’ve all learned and developed “relationship survival strategies” and many to those lessons have been born out of painful ordeals that left us committed to avoiding the vulnerability that conscious combat entails. Letting down this protective armor that our defensive and controlling strategies provide can feel like a foolish exposure to dangerous threats and an invitation to emotional disaster. Yet practicing vulnerability and emotional disarmament is more likely to produce a conciliatory response than defensiveness, which often invites aggression.

Standing undefended in the face of a perceived threat is not for the faint of heart. It requires courage, dedication and practice to cultivate and strengthen the qualities of a conscious combatant. But the benefits of mastering the art of conscious combat extend far beyond enhanced effectiveness in conflict management.  The complaints and grievances that are exchanged so frequently in close relationships often provide essential information to both parties in regard to what is perceived as missing or not working in the relationship. When we can express and receive this input through effective forms of communication, we can more easily and skillfully reconcile differences through the open exchange of concerns, needs and desires. As this process continues, couples become more capable of understanding perspectives and the likelihood of alleviating and fulfilling personal and relational needs in greatly increased.

When couples start to practice the principles of conscious combat, it’s generally best to begin by addressing smaller concerns that are less emotionally-charged and to try to be patient with the process. It’s easy to forget how entrenched in defensive patterns most of us are. It’s not surprising, since we’ve been perfecting and reinforcing them for years, even decades. Simply deciding to interrupt them with new intentions and practices isn’t likely to bring immediate and permanent change. But it may be enough to begin a shift that with perseverance, intentionality, and continued practice will bring about profound results. It’s been said that living with an open heart requires a cup of understanding, a barrel of love, and an ocean of patience. Sometimes that seems like an understatement.