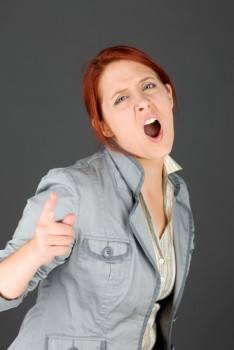 Therapist: “The other night, you were angry at Mary for failing to read your mind and stop nagging you about being on time.”

Glen: “Yes, I was. It all came back to me, feeling powerless and helpless to make her stop. After all these years, I’m still unable to tell people how I feel or what I want them to do.”

These emotional memories predisposed Glen to take his wife, Mary’s accusation from a highly personalized point of view:

1. “What she says is contrary to fact. It is my responsibility to improve the situation by rectifying her mistaken perception.”

2. “This argument is her fault because she is so unreasonable.”

3. “Her unreasonableness, in turn, is my fault because I have failed in my responsibility to be a good husband.”

For her part, Mary’s accusation succeeded in stirring up her husband as she knew it would:

1. “This wouldn’t have happened if he wasn’t so impatient and didn’t neglect me.”

2. “It’s also my fault because I have failed to calm him down. In fact, I am guilty of making it worse.”

Each spouse is compounding their own guilt by assuming inappropriate responsibility for the other’s distress, and for their “failure” to relieve the other’s pain. In so doing, they only succeed in prolonging the disappointing and inconvenient circumstance.

The key to overcoming blame is realize that:

•The issue is not guilt, fault or blame; the issue is human imperfection.
•We are still worthwhile human beings in spite of what happened.
•It was not a crime and we are not guilty. A more appropriate emotion to feel would be regret, which is the wish that things were other than they are.
•It is appropriate to make amends for what we have done.
•If there are consequences from our imperfect behavior, we are prepared to accept them.
•We can choose not to take the consequences personally. Consequences are not a reflection of our worth as a person. If you are, for example, habitually twenty minutes late, your companion can choose to leave without you. No hard feelings. No revenge, just the consequence of your inappropriate behavior.

Therapist: “What do you think you might do about it the next time Mary makes you angry with her helpful nagging ?”

Therapist: “That’s part of the problem. It is foreign to your upbringing. You have never seen two mature adults expressing their anger appropriately and solving problems in a context of respect. It’s no wonder you feel inadequately prepared to solve your anger problems with Mary.”

Glen: “I blame her for starting it, but underneath I know it shouldn’t get me so angry.”

Therapist: “Does ‘shoulding’ on yourself help? It is not a matter of fault or blame. It is a matter of human imperfection.”

Glen: “All right. What can I do instead next time?”

Therapist: “The first step is to identify your feeling. You cannot express your feeling if you do not know what it is. You are not ‘stressed,’ you are angry.”

Therapist: “The next step is to catch yourself expecting Mary to know how you feel without telling her. That is not her job. She has her own problems. She is not a mind-reader. You have to read your own mind.”

Glen: “I can do that if I can remember to catch myself in time.”

Therapist: “The third step is to express your anger appropriately. You can choose to say, ‘Mary, it makes me angry when you tell me what to do.’ Is that the truth?”

Glen: “Yes, that’s the truth. Is it alright to tell her I’m angry?”

Therapist: “Mary is it all right if he says he’s angry?”

Mary: “Of course it is. I would understand and calm down. I would know where you were coming from.”

Glen: “I thought it would make you angry It’s good to know I can use my words to tell you how I feel.”