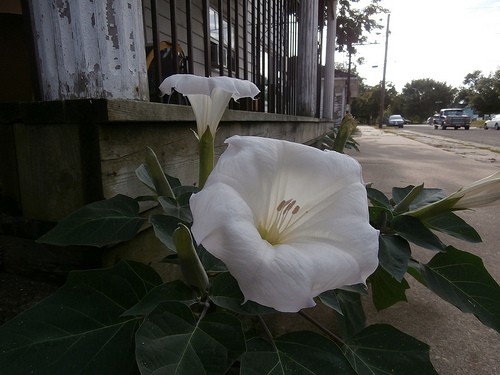 Imagine what your life would be like if all of the things that most of us take for granted were not there. Things like food, a functional bathroom, clean clothes, privacy, adequate heat in the cold of winter, a sense of physical and emotional security, and other ingredients that most of us consider the basics of living. And imagine if instead, your life was filled with all of the opposites of those things: filth, neglect, hunger, exhaustion, anxiety, shame, and squalor. Then imagine that you were a child, a very young child living in that environment with no hope of any possible redemption from your suffering and no end in sight of your misery.

Liz Murray was born into and spent her childhood living in such circumstances. Her parents were drug addicts and both eventually succumbed to AIDS. Liz and her older sister lived with them in a squalid apartment in the Bronx which during most of their childhood was the base for ongoing drug-dealing and drug use, with strangers coming and going throughout the day and night, strangers who like Liz’s parents had only one thought in their mind: getting their next fix.

Yet as overwhelming as the physical deprivation was that Liz experienced, it was not the most difficult part of her life. “It was”, she told us, “the feelings of loneliness, shame, and isolation that I lived with daily that made my life so painful. As much as I knew that my parents loved me, their enslavement to drugs made it impossible for them to provide for my most basic needs or even their own for that matter.”

Liz learned, from a very young age, that she was not only going to have to fend for herself but that she would have to take care of her parents as well, since their obsession with drugs prevented them from attending to even the most fundamental requirements of living. The only income that the family ever saw came from a small monthly SSI check that her mother received because she was legally blind. This was occasionally supplemented by small amounts of income that came in from sales of discarded items that her father found in trash cans and from petty cash that her mother hustled through prostitution and panhandling. The SSI check came on the first of the month and by the end of that week, all of the money would be gone. With three weeks left until the next check and no money, Liz’s mother was so desperate and strung out that she frequently stole the hard-earned money that Liz made and saved doing odd jobs in the neighborhood from a very early age. But the money never went for food, even when Liz and her sister Lisa had nothing to eat. It was always spent on drugs for her parents..

Liz’s father was incarcerated during the first three years of her life and she first laid eyes on him when he was released from prison shortly after her third birthday. When Liz was six, she was sexually molested by a “family friend” who was brought into the home by her mother. Shortly afterwards, her mother became schizophrenic and was hospitalized in the first of a series of hospitalizations that would continue until her death from AIDS in 1996. After the death of her mother when she was 15, Liz became homeless and spent the next several years living on the street, occasionally spending the night with friends, or riding and sleeping on the New York subways all night in order to stay warm.

Living in the chaotic environment that characterized her life had made it impossible for Liz to attend school on anything but a very infrequent basis, or concentrate on academic subject matters at all. When she was in school her classmates continually taunted and harassed her for her ragged clothing, her filthy hair and unwashed body, and Liz experienced herself as a pariah throughout most of her childhood. She had few friends and she internalized the judgments about her that others held: that she was worthless, ugly, defective, and stupid, perhaps even retarded.

Yet Liz was not only possessed an intellect far beyond what she or others realized, she also had character strengths that enabled her to transcend the horror of her life circumstances and achieve inconceivable accomplishments. And yet even this isn’t the most impressive thing about Liz or her life.

What is most amazing about this remarkable young woman (Liz is just 32 years of age) is that throughout the hardship, deprivation to the point of near-starvation and uncountable instances of neglect and abuse, she managed to keep her heart open without succumbing to the temptation to become bitter, hateful, or vindictive, as so many in similar situations have. Liz doesn’t seem to have an ounce of self-pity in her body, although no one could possibly blame her if she did. If anyone ever had a right to feel that she got a raw deal in life, it’s Liz. And she did. But self-pity and bitterness are not her thing. What her thing is, is love. It’s Liz’s enormous capacity for love and compassion and her commitment to service that makes her the extraordinary person that she is. Her willingness to live with an open heart has attracted many people into her life and some have taken advantage of her openness seeing her vulnerability as something that they could exploit for their own interests. But others have responded to her vulnerability with compassion, love, and great generosity.

Despite getting rejected by a great many alternative high schools as an adolescent, Liz continued to pursue her desire for an education and was finally accepted into the Humanities Preparatory Academy in Manhattan where she was befriended by two inspired and inspiring teachers, Vince and Perry, who recognized in her great inner beauty, strength and intelligence. Thriving in their encouragement and validation, Liz committed herself to her studies and completed four years of high school in two years receiving straight A’s throughout. She remained homeless during this time, although no one knew it. She worked summers to cover her living expenses and ate meals at a shelter that provided food for homeless young people.

One day on a field trip to Boston with her high school class, Liz visited Harvard and was deeply impressed with it even though she had barely heard of the university prior to the trip. A few months later when it was time for Liz to apply to college, Perry suggested that she consider Harvard. He told her, “Sure it would be a reach, but it’s not impossible”. What happened next is the stuff of fairy tales but this was not fiction, it was reality. Liz was accepted by Harvard, but then there was of course, the little matter of paying the tuition and covering the living expenses at one of America’s most prestigious and expensive universities. Undaunted, Liz, along with several thousand other high school students, entered an essay contest sponsored by the New York Times. The guidelines for the contest required applicants to describe any obstacles that they might have had in their lives that they had to overcome in order to thrive academically. Liz won the contest and was granted a full scholarship to Harvard.

Liz interrupted her education at Harvard in 2001 to care for her father who was sick with AIDS, attending Columbia University and caring for him until 2006 when he died. Liz later returned to Harvard and graduated in 2009.

A poster child for transformation, Liz has an indomitable spirit and will to survive and has prevailed against all odds. She currently travels nationally and internationally and is a highly sought after motivational speaker. She is the founder and director of Manifest Living, based in New York City, a company that sponsors workshops that empower and inspire adults to create extraordinary things in their lives, as Liz has.

Her inspirational life story was captured on Lifetime Television’s original film, Homeless to Harvard: The Liz Murray Story, which was nominated for three Emmys. She is the author of the New York Times bestseller Breaking Night, a memoir, which was released in September 2010. She has since then gotten married and had two children. In 2013 Liz was awarded an honorary Doctorate of Public Service from Merrimack College in Massachusetts.

Liz is undoubtedly one of the most resilient, compassionate, and committed individuals we have ever met and obviously wise beyond her years. She is an inspiration to everyone who is fortunate enough to cross paths with her. The next time you doubt your ability to accomplish something that is very important to you, think again. Think of Liz.