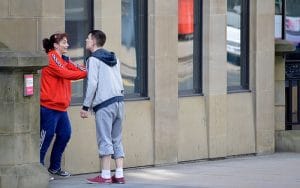 When our companion says, “You’re selfish,” we can say, “I never thought it that way.”

That isn’t admitting anything, or giving them the satisfaction. It is disarming. It takes the sting out of it. If they expect us to defend our innocence, we can choose to do what they do not expect instead: “It’s awful, isn’t it?”

Learning to detach often begins by learning to take a moment before reacting to another person’s behavior. In that moment we can ask ourself, “Is this behavior coming from the person or the situation?” This distinction encourages us to emotionally distance ourself from the other person’s actions.

Detachment is one of the most valuable techniques available to stop ourself from taking the behavior of others personally. Simply put, detachment means separating ourself emotionally from what other people do.

Detachment occurs when we are able to separate the act from the actor, the people from their behaviors, the sin from the sinners. If someone we love had the flu and cancelled plans with us, we would understand. We wouldn’t take it personally or blame the person for being inconsiderate or weak. Instead, in our mind, we would probably separate the person from the illness, knowing that it was the illness, rather than our loved one, that caused the change of plans. That is detachment.

But it is important to remember that emotional detachment and establishing personal boundaries are not the same as building walls. Our goal is to heal ourself and our relationships with other human beings, not to coldly distance ourself, especially from the people who matter most to us.

When someone causes a change in plans, or sends harsh words or engages in other unacceptable behavior, we can choose to take it no more personally than we would take the flu symptoms. With the flu, it is the disease, rather than the individual, that is responsible.

By seeing the person as separate from the situation, by detaching, we can stop being hurt by groundless insults or angered by outrageous lies. If we can learn to step back from this person, just as we would from the sneezing of a person with a cold, we will no longer have to take those effects to heart.

Antagonizers are not doing what reality requires. Since they don’t know what reality requires, they can only strive to prepare, prevent, plan or control potential, future pain. That is antagonism. We can disengage from their antagonism by doing the unexpected. We can use our sense of humor and we can even agree that they feel that way.

We can choose to agree with the feelings, not the facts. Agree that they feel the way they feel by saying, “It’s awful, isn’t it!” Or “I don’t blame you, I would feel that way too if I thought that..” Or, “I never thought of it that way.”

Reality requires us to know what we are thinking and trust our own judgment. We can use our adult judgment to determine which words make sense and which are used to be hurtful. Any solution using our judgment will be good enough to get the job done. We can do the unexpected and use these responses:
• “I am sorry you are so angry.”
• “It makes you angry when that happens doesn’t it?”
• “I don’t blame you for feeling that way.”
• “I know you mean well and want what’s best for me, but I prefer to do it this way.”
• “I can tell you’re angry, you are shouting.”
• “I hear what you’re saying, I appreciate it, and I’ll be fine.”
• “I totally agree, I’m just not sure it would help.”
• “That would be nice wouldn’t it?”

We know that some will respond in a defensive way: “Who cares?” This is antagonism, too, and we can disengage from it. We have made our point. We don’t have to make a federal case out of it. We can stand our ground and say, “That makes me angry too.”