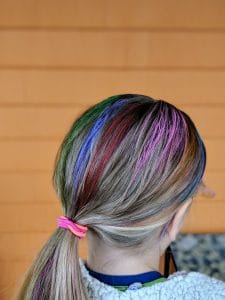 Crazy hair day. For the record, hair chalk is a huge pain in the tushy.

This weekend was a shitshow, y’all.

Saturday morning found me dropping off one kid (not my own) who had spent the night at our house and then picking up my daughter, who had spent the night at another friends’ house. We had a busy day planned; it was our last chance to find dresses, shoes, and anything else the girls would need for my cousin’s fancy wedding next weekend. My daughters are seven and nine, and delicate little flowers to boot (except then they’re digging their elbows into my boobs with the force of a WWF wrestler). This sensitivity can make clothes shopping particularly challenging, especially if said clothes might entail any sort of unfamiliar fabric, cut, or embellishment that could potentially brush against their skin at any point.

And don’t even get me started on the shoes.

I’ll spare you the goring (gory + boring) details of the day, but there was whining, snapping, bickering, door slamming, and multiple trips to Costco (don’t ask) for reasonably priced fancy dresses. We followed that up with forty-five minutes spent trying on and summarily rejecting approximately 387 pairs of size 2 dress shoes before settling on sneakers. SNEAKERS. Yes, they are fancy sneakers, but sneakers nonetheless. Sigh.

Oh, and not to bury the lede or anything, but I shut the car door on my daughter’s finger in the middle of a busy parking lot. She wailed, I found a band-aid, and ultimately she was fine, but I felt AWFUL. Really, really awful. Mindful parenting? Yeah. Right. I’d be lucky if I could make it through the day without physically injuring them.

We ended up having dinner at a terrible restaurant, but at least there were screens on every table so we could spend the meal continually rejecting the girls’ requests to pay $1.99 to play some stupid game. Bonus!

Sunday wasn’t a whole lot better. Nobody drowned or lost their sh*t at swim lessons, so that was good, and the Target Gods smiled upon us by having white camisoles and capri leggings in stock (thereby minimizing the amount of fancy dress fabric touching the girls’ skin). Even so, there was still a shocking amount of fighting, nagging, whining, and yelling, and by the end of the day, I was DONE. DONE DONE DONE. Truth be told, I was done before lunch, but we were out in public so I did some serious adulting and held it together.

Once the girls were finally in bed (which in itself was a fairly epic endeavor that did not showcase my finer parenting skills), I retreated to My Happy Place, also known as The Couch. I spent some time trying to understand why the weekend had been so rough, and what I could do differently in the future. Here’s what I realized:

I forgot to look at the big picture.

I got so caught up in the moment-to-moment frustrations and power struggles that I forgot to step back and consider what might else might be going on. I was so busy being annoyed at the girls for not eating their chicken or giving me attitude about cleaning their rooms that I didn’t even think about everything our family had done the past couple of weeks.

We had spent our February vacation visiting family out west, flying back the night before Crazy Hair Day at school, which was followed by Pajama Day, Insight Out and Backwards Day, Costume Day, Spirit Day, and Can Somebody Please Get Mommy a Xanax Day. It was all good stuff, but two straight weeks of unpredictable schedules, new experiences, and overly fun activities had completely depleted our entire family. I then thoughtlessly allowed them to end the week with spontaneous sleepovers, thereby essentially guaranteeing they wouldn’t get the sleep they needed.

Once I figured out the likely source of the weekend chaos, I thought about what I could do better the next time this happens (make no mistake about it, there will always be a next time). It all boils down to two simple, but not always easy, steps.

Step 1: Slow everything down. Waaaaay down. When I move slowly, I make it less likely that I will forget, lose, drop, or break things. I also feel less stressed, which means I’m less likely to snap at the girls. Besides, it’s not like I’m Jack Bauer in 24, racing to save the world. There’s just no reason for me to rush as often as I do, and each time I do, I risk missing the the big picture, or worse, such as slamming my daughter’s finger in the car door. Doh. Now, slowing down isn’t easy, especially when I’ve gotten in the habit of rushing even we’re not running late. I have a little mantra that helps me remember to slow down, courtesy of my favorite Zen Master (and in all honesty, the only one I’ve ever heard of), Thich Nhat Hanh. Smile, breathe, and go slowly. I remind myself to smile, breathe, and go slowly several times each day, so if you see me wandering around with a ridiculous grin on my face, now you know why.

Step 2: Calm everything down. Yes, I need to calm down in the moment, but it’s more than that. I’m talking about calming the entire family down in the aftermath of a Big Adventure or Major Change. Had I remembered this, I wouldn’t have let the girls go on those sleepovers, and I would have made sure we had extra home time this weekend, time for reading, snuggling, playing, or even watching a movie together. Truth be told, even quiet afternoons aren’t enough to avoid the meltdowns, but they’re easier to handle when we’re not trying to get somewhere or get something done.

It’s helpful to remember that just because we’re free to do something that doesn’t mean we should do that thing. I need to look not just at each particular block of time, but the days and weeks on either side. Have we just come through a particularly busy time, or are we heading into one? Do we already have a few late nights scheduled, or even just one? When that’s happening, it’s especially important to leave some downtime in the schedule.

And finally, no matter what, I have to remember to go easy on myself when I forget what I should remember, when I rush instead of slowing down, when I snap instead of breathing. Remembering to smile, breathe, and go slowly in the middle of a difficult parenting moment isn’t easy, but fortunately my kids will give me lots of opportunities to practice.

Want more mindful parenting and updates on my forthcoming book, How to Stop Losing Your Sh*t With Your Kids? Sign up for my free newsletter here.