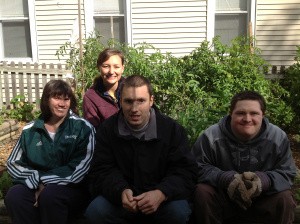 Mary Julia (Julie) Hanser moved to Cincinnati in 1993 and in her 10 years of life in the city, she built Mercy Healthcare into a profitable, regional healthcare system. More importantly, she was also a compassionate individual who, according to her brother, Father Forest Patrick, “…was dedicated to the service of the poor.” In her obituary, he is quoted as saying, “She was quite concerned for individuals who were poor and without health insurance and women, battered women.”

Before her death in 2003, she impacted her adopted community in many ways. In that short decade, she served as a campaign leader for the United Way, on the cabinet for the Fine Arts Fund, as a president of the Great Rivers Girl Scout Council, on the board of trustees at the Work Resource Center and as an active member of the greater Cincinnati Health Council Board. She received a YMCA Character Award for demonstrating positive character values and she was also honored by Leading Women, a consortium of more than 40 Cincinnati Women’s organizations, for her contributions to healthcare. She also worked with another group here in Cincinnati, Healing Connections. It was from this work that perhaps her best, most lasting legacy sprang — a garden on Stanton Avenue in Walnut Hills, named after her in 2006 to honor her memory.

The garden started its early life in 2000, known as the “SEEDS” children’s garden, started by the Morning Star Baptist Church, which still owns the property. For two years, the children from the Morning Star Daycare grew vegetables and flowers in the raised beds of the garden, but the project was abandoned in 2002 as was the garden until 2006. That year, Healing Connections, now merged with two other local organizations into Mercy Neighborhood Ministries, approached the Civic Garden Center for help in restoring and using the former SEEDS garden, for the purpose of growing fresh vegetables for seniors on limited incomes and/or homebound by physical infirmities. The goal was to promote healthy eating and healthy behaviors for residents in Walnut Hills. The garden at 2627 Stanton Avenue began its new life and mission, summarized by Sue Plummer, its present coordinator, as a “garden designed for people who cannot garden themselves.”

Kathy Durkee, Program Director, Senior Services, coordinates assistance for Walnut Hill’s seniors living on limited budgets, which also means limited access to fresh food. From April to October, she says the seniors look forward to the inclusion of freshly grown food from the Hanser garden, picked and packed into 1 gallon bags along with the canned and frozen food provided to them by the Freestore Foodbank. Sometimes it is also a learning experience when they receive vegetables they have never seen before. 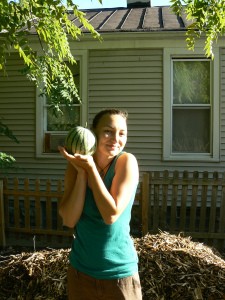 When that happens, citing this year’s addition of saucer shaped pattypan squash, she tries to tuck a recipe into the bag so that the seniors can try cooking the unfamiliar vegetable. The garden provides enough weekly fresh produce during the growing season for about 100 seniors. About 25 of the bags are delivered directly to homebound seniors, while the remainders are picked up as seniors stop by for their weekly supplement of groceries.

Besides the garden, Sue Plummer’s main job at Mercy Neighborhood Ministries is as an evening GED instructor helping local residents complete the schooling necessary to continue their education, leading to better jobs with better pay. Everything that MNM does for the residents of Walnut Hills is about bettering their lives and the garden plays a subtle part in this effort.

Not only does it serve to feed neighborhood residents, the Hanser garden also is a creative outlet for those involved in its care and upkeep. While the garden’s main purpose is growing fresh, healthy food, Plummer also sees the Hanser garden as a vehicle for fostering community relations, both socially and visually. When she comes to work in the garden on the weekends she likes to concentrate on the flower beds up front. She strives to create a place where residents walking or driving by will see flowers and color.

It was the flower beds that first drew the eye of Jocelyn Coulter. A friend of Plummer’s since their time as Americorps workers, she first noticed the garden as she passed by it from her nearby home going to work. Her first response she says, was, “What’s that?” as she noticed the colorful flowers, Coulter began work at the Hanser garden as a volunteer, before taking over this year as a paid worker overseeing its weekly upkeep. She made efforts to expand her garden knowledge through attending the Community Garden Development Training at the nearby Civic Garden Center. Coulter also uses the garden as a volunteer opportunity for members of Starfire, a local organization encouraging positive community activities between people with disabilities and those without. Starfire volunteers join Coulter weekly in the garden during the growing season.

Coulter recently completed a master’s degree in environmental education, reflecting her love for nature and sharing that love with others at her other jobs — an event coordinator at the Cincinnati Zoo and also in her weekly afternoon employment at Seven Hills/ Doherty School where she works with younger children as an afternoon extended care coordinator. She says she uses her time outside in the Hanser garden to balance out her indoor responsibilities at her other jobs.

She loves both the garden and the residents who live around it, mentioning in particular, Solomon, who bought one of the properties flanking one side of the garden back in 2009. A little over two years ago, he allowed the Hanser gardeners to begin harvesting rainwater from his roof using rain barrels on two sides of his property. Solomon says that the gardeners are the only people his dog, a very protective Akita, will allow to enter his yard as they access the water from the rain barrels. He is also pleased with the social benefits of the garden, particularly the relationships that he sees developing between the young children of an upstairs tenant, whom he considers as his “2nd grandchildren” and the gardeners. He likes the special bond Coulter has developed with the children. They look forward to their time in the garden, especially with Coulter, and as a result, they too, have begun to take a proprietary interest in the garden. Solomon observed that the 6 year old enjoys working in the garden and picking the fresh produce with Jocelyn, but, chuckled as he said, “not so much eating it:”

Perry Patton, the Hanser garden neighbor on the other side freely provides water for the garden when the rain barrels run dry. While the gardeners have offered money for the water received from both homes, Plummer says the only payment that either Patton or Solomon has accepted is the offerings of fresh picked greens and vegetables, which Coulter and Plummer leave tucked in their mailboxes. Both neighbors also keep a close and protective eye on the garden after its caretakers depart.