My second guest post is a reflection by my friend and mother of three boys, Logan Ritchie. Her response to her son when he hit a friend absolutely blew me away. 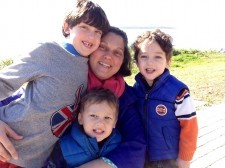 That phrase really resonates with me.

As first-time parents, we worry about small stuff like eating dirt, biting, and delayed speech – all a natural part of raising small children who are exploring and respond to the world around them. As our kids grow we realize that these little things are just a phase.

And then one day your bright, well-liked, peaceful boy throws a gut-punch to his best friend.

I was already en route to pick up my second grader from his best friend’s house when the call arrived. He was mad, punched his buddy, and refused to apologize. Flabbergasted, I called my husband. “Just tell the mom that boys will be boys,” he advised. “It was probably just a misunderstanding.”

That wasn’t going to work. I don’t believe in that theory of rough and tumble play and it isn’t how I’m raising my three young boys.

When I arrived, both boys were in tears. I tried to facilitate a conversation in which each child felt free to express his feelings about what happened before and after the punch. It was shaky, at best. My kid was surprised at his own behavior and felt displaced anger; his buddy was shocked that his best friend would physically attack him.

I don’t believe in forced apologies. They aren’t heartfelt; they just fill the air with stale, perfunctory words. So the mom and I exchanged furrowed brows and shoulder shrugs, and my son and I left.

“How much trouble am I in? What is my punishment? I know you’re mad at me! Am I allowed to go to baseball practice tomorrow? What are you going to tell Daddy?” He sobbed from the back seat.

I stayed quiet and thought about his reaction to me. I had said nothing of a punishment; I wasn’t even sure I’d heard the entire story. Yet my son, who is naturally emotionally guarded, was so concerned about what I was going to do that he couldn’t control himself. He cried all the way home.

Let me be honest. My first inclination is to chide first and apologize (if necessary) later. I have tendencies toward perfectionism and I often feel out of control when my children act out. This situation was different for three reasons: 1) I had time to process this unusual behavior on the drive to pick up my son; 2) the other mom was disappointed but she never judged me or my child; and 3) my son’s fear of punishment awakened me.

Instead of expressing disappointment, taking the other kid’s side, and making my son feel bad for his actions — my gut reaction — I made a deliberate change and cooled down before acting.

My husband was home when we arrived. I dumped our twin toddlers in his lap, gave dinner instructions, and led my oldest son upstairs to my bedroom. We sunk down on the bed.

“Our bodies are like a bottle,” I said, drawing on scrap paper. “And when we keep our feelings inside they start to take up space inside. Let’s say someone cut in line at school. That would make me a little mad.” I continued coloring in the bottle while he shared scenarios of what irritates him: icky leftovers in his lunchbox, when reading time ends, mean kids on the playground, and so on.

“If we keep all these feelings in, the one that sets us over the top could be tiny but our reaction is so big. Like punching a friend.  Think about it: Did you punch him because of the joke he told at your expense? Or was that just the last thing to make you mad? Maybe that punch was a result of all of your hurt feelings up until now.”

His feelings poured out. I learned more about playground politics, his classroom and teachers, his buddies, and his insecurities that night than ever before. All because I stopped talking and started listening. I asked non-judgmental questions. I was calm, relaxed, and focused.

I made one little change by breathing and staying quiet, and it led to my son’s big change to open his heart to me and tell me all the things, big and small, that had been on his mind. Together we opened conversations about what it means to be a friend, when to give another person some space, and how to adjust to changes in friendship.

The experience surprised me; who knew I had the capacity, the maturity, the thoughtfulness it required to discipline softly? After seven years of parenting this child, I had discovered a new way to communicate. And I’m not letting it go. He may never punch someone again but I don’t want to say the same about my new style – the bigger the kid, the softer my approach.

Logan Ritchie is the mom of three boys: a 7-year-old who loves math and 3-year-old twins who love to climb furniture. She lives with her husband in Atlanta, GA and craves silence and a clean kitchen. She earned a BA in writing from Emerson College in Boston.