The Hidden Cost of Fitting In 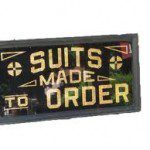 Here’s a story that you may have heard, but its message is timeless and it bears repeating:

There once lived a tailor name Zumbach who had a reputation for making the finest of clothing. He used only the best fabrics and he was especially known for his impeccable suits. One day a man named Sam walked into his shop and plopped down a large bundle of money in front of the famous tailor.

“I’ve always wanted to own one of your suits and I’ve been saving up for years. Is this enough money for you to make me a suit?” After carefully counting the money in front of him, Zumbach replied, “Yes, I could make you a suit.” “Wonderful!” said Sam, clapping his hands and smiling with delight. “First,” said Zumbach, “I need to take your measurements.” The nimble tailor took out his tape measure and proceeded to take Sam’s measurements, carefully recording every detail in a small notebook. Then together they picked out an elegant cloth from Zumbach’s fine selection.

“Come back in two weeks,” Zumbach said, “and the suit will be ready for you.” When the promised day came, Sam could barely contain his enthusiasm. He showed up at the tailor’s shop before it even opened. “Is my suit ready?” Sam asked Zumbach when he finally arrived. “Yes, of course.” said the tailor, “Come in. Here it is. Try it on.”

“It looks beautiful!” said Sam as he stepped into the suit. There was however, one problem. The suit didn’t fit. One leg was four inches shorter than the other, the sleeves were also of different length and the shoulders were several sizes too small. Sam was disappointed and angry. “Zumbach, what have you done to my beautiful suit? You’ve ruined it!”

“Here,” said Zumbach, “let me show you. Just bend your left knee a little more. Yes! That’s good. Now pull your right arm up two inches and bend your elbow. Perfect! Now one more thing; raise your shoulders up so that they’re almost touching your ears. Just like that! Beautiful! You see? The suit fits you perfectly! Look in the mirror. You look like a million bucks!”

Sam took a look. He had to admit that the suit did seem to fit better now that he was wearing it properly although somehow it still didn’t feel quite right. He paid Zumbach for the suit, shook his hand, and left the shop to catch a bus back to his apartment. As he stepped on the bus, the driver smiled at him and said, “That must be a Zumbach suit that you’re wearing.” “Yes,” said Sam, smiling with pride. “How did you know?’ “Because,” said the driver, “only the gifted Zumbach could make a suit for a man whose body is as crippled and misshapen as yours.”

Many of us, like Sam, spend our lives twisting ourselves into shapes and postures that are unnatural and uncomfortable in the hopes of gaining acceptance from others whose approval we desire. We may contort ourselves into shapes that are entirely unnatural for us in our efforts to win others over, to live up to their expectations, or to avoid conflict. While some degree of accommodation is undoubtedly necessary in most relationships, a steady diet of it will eventually damage our integrity and inevitably lead to a diminishment of our sense of self-worth. As our self-respect erodes, we feel more in need of external validation and tend to be even more willing to compromise our own truth in order to gain the love that we are becoming increasingly unable to give ourselves.

Like any other compulsive or addictive behavior pattern, the more we indulge this process, the more locked in and dependent upon it we become. We find ourselves in a closed loop that eventually strangles the life out of our relationships that are unable to bear the weight of the responsibility for propping us up and filling our need for love and acceptance. We are so busy focusing on what we think that others expect of us that we fail to recognize what we deeply desire for ourselves and what is true within our own heart.

There is an old saying that “you can never get enough of what you really don’t need.” We are the only ones who can accurately identify what we truly need. If we give that authority over to others, we will inevitably be disappointed because no matter how much they care about us, no one else can ever know the truth of our inner experience. In taking back the power to fulfill more of our own needs, we become responsible in the truest sense of the word. Only then are we “able to respond” to the challenges, demands, and opportunities that present themselves in the unfolding moment-to-moment experiences of life. This quality of “responsible self care” is what promotes a feeling of empowerment rather than victimization, of gratitude instead of self-pity, of generosity rather than possessiveness, and of enthusiasm rather than anxiety. It is also the ground upon which genuinely fulfilling relationships are built.

Living a life of response-ability means that we don’t spend much time in resentment or self-pity because there’s no one to blame for the life we are given and the life that we create. “No one” includes ourselves. Such a life requires us to establish a compassionate and accepting relationship with ourselves. This can be quite a challenge when we’ve been accustomed to focusing on the expectations of others or if we question our worthiness of such a goal. It takes courage to risk the disapproval of those whose opinions we cherish and it takes even more courage to go against the not-so-small voice within our own mind that lambastes us for being self-centered and selfish for focusing on our own needs rather than those of others, even though doing so ultimately enables us to be more giving and generous with them.

It is every couple’s challenge for each partner to hang on to themselves while they are making adaptations to fit in with their partner’s style, their ways of doing things, and even their differing values and idiosyncratic needs. It’s a real stretch for the one who is good at getting their own needs met, to let go periodically to learn to be more accommodating with others. And it can be every bit as difficult for those of us who find it all too easy to sacrifice ourselves in order to fit with others to recognize our own needs and take a stand to honor them. But then again, no one ever said that great relationships don’t require some real work on our part, and if they did, they lied. Embodying a life of responsibility and integrity is not for the faint of heart.  It does however have its rewards, and they are many, as anyone who has taken on this commitment will attest. Once you get on the path of egalitarian partnership, there’s no going back!