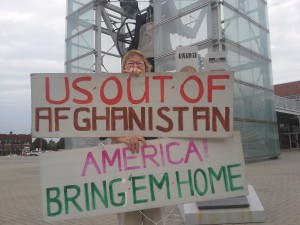 Why is the United States still in Afghanistan eleven years later? What has the war accomplished? What can it accomplish? After eleven years, the Taliban are resurgent and though Osama Bin Laden was assassinated by the U.S. military, al-Qaeda is still a threat to the United States. Two major wars against Islamic peoples in Iraq and Afghanistan have not brought peace, democracy, or economic improve to the region.

The U.S. War on Afghanistan has been going on now for eleven years this month, making it officially the longest war in U.S. history, though in reality the U.S. has made war on other peoples for far longer. The U.S. war against the Apache lasted from the 1840s to 1886. The United States spent virtually an entire century from 1890 to 1990 involved in a series of wars in the Caribbean and Central America. Some countries were repeatedly invaded and then occupied by the U.S. Marines to protect American economic interests, such as Nicaragua from 1909 to 1933 and Haiti from 1915 to 1934.

Vietnam was also a long war. One could argue that the U.S. was at war against the Vietnamese for thirty years, from 1945 to 1975. Democrat Harry Truman provided aid to the French from 1945 to 1954 and then the government of Republican Dwight D. Eisenhower provided assistance and training to the troops of the corrupt U.S. creation, the government of South Vietnam, from 1956 until 1960. Democrat John F. Kennedy took public responsibility for the war and began sending the U.S. Air Force to spray the forests with Agent Orange and sent 21,000 troops. After Kennedy’s assassination, his successor, the Democrat Lyndon B. Johnson, eventually 537,000 U.S. troops were sent to Vietnam. During the period from 1955 to 1975, some 58,000 U.S. troops died, over 300,000 were wounded in action, and two million Vietnamese were killed. But Congress never declared war on Vietnam, it just financed it.

War of Revenge or War Against Islam?

The United States and its allies invaded Afghanistan on October 7, 2001in what was called Operation Enduring Freedom with the goal of removing the Taliban government which had provided a safe haven for al-Qaeda, the terrorist organization that launched the September 11, 2001 attack on the United States resulting in nearly 3,000 American deaths. While the War on Afghanistan had the character of a war of revenge against the Taliban and al-Qaeda, it was also an expression of an evolving conservative ideology that justified U.S. wars against Islamic cultures and peoples.

In a 1992 lecture at the conservative American Enterprise Institute, Samuel P. Huntington argued that following the fall of the Soviet Union, the United States and other Western nations would find themselves involved not in economic or ideological wars but rather in cultural or religious wars. Conflicts between the West and a resurgent Islam, he suggested, should be expected. His lecture, which became first a Foreign Affairs article and later a book published in 1996 with the title The Clash of Civilizations and the Remaking of the World Order provided part of the ideological basis for changing American political attitudes toward the Islamic world.

The Influence of the Neo-Cons

Meanwhile, another think-tank, the Project for the New American Century, founded in 1997 by Irving Kristol and Robert Kagan, began to argue that the United States had to struggle to retain its position of world political and military dominance. Simply put: the United State should run the world, and the peoples of the world be damned. These neo-conservatives or Neocons as they came to be called, pressed for increasing the military budget, and for removing the Iraqi leader Saddam Hussein. The George W. Bush administration, particularly Vice-President Richard Cheney, opened the door to the PNAC Neocons; Donald Rumsfeld became Secretary of Defense and Paul Wolfowitz his Under-Secretary. They eventually succeeded in 2003—by lying about Iraq’s possession of weapons of mass destruction—in achieving their goal of getting the United States to invade Iraq, occupy the country, and put in place a new government.

While the U.S. invaded and occupied Iraq, the Taliban made a comeback in Afghanistan, leading recently elected President Barack Obama to send a new “surge” of troops into Afghanistan in 2009, yet there was no decisive turnaround. Two years later, President Obama began his promised withdrawal of U.S. troops from Iraq, completed in late 2011. The Iraq War had taken the lives of 4,477 U.S. service men and women, left 32,226 wounded in action, certainly over 100,000 Iraqis have been killed and probably many more. Andrew J. Bacevich, a retired U.S. career military officer who lost a son in Iraq, wrote in a Washington Post opinion piece, “Undertaken to demonstrate our supremacy, the war has instead revealed the stark limits of American power.”

With the Taliban still a significant force in Afghanistan, the United States government under President Barack Obama expanded the use of drone missiles to attack Taliban targets in Northwest Pakistan that had been begun under President Bush in 2004. While the Obama administration claims that the drones carry out “surgically precise” attacks, a report by Stanford University and the New York University titled “Living Under Drones: Death, Injury and Trauma to Civilians From US Drone Practices in Pakistan,” found that the drones killed many civilians and that few if any of the victims—only 2%—were Taliban or al-Qaeda terrorists. The report cited the figures of the Bureau of Investigative Journalism, an independent organization based at City University in London, that found that “from June 2004 through mid-September 2012, available data indicate that drone strikes killed 2,562 – 3,325 people in Pakistan, of whom 474 – 881 were civilians, including 176 children.” The TBIJ reports that these strikes also injured an additional 1,228 – 1,362 individuals.

President Obama has talked about withdrawing some U.S. troops from Afghanistan by 2014, but there is no promise to withdraw all U.S. troops and the Pentagon wants to keep 25,000 troops there until 2024. Nor is there any end in sight for the drone missiles. Meanwhile you can be sure, other wars will come along. If we want to end the Afghanistan War and the drone attacks on Pakistan, it will take the same sort of movement we built to end the war in Vietnam.