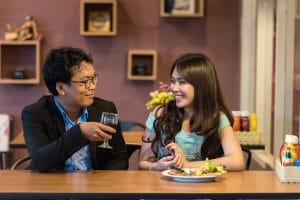 Linda: Sandwich is defined as an item of food consisting of two pieces of bread with meat, cheese, or other filling between them, eaten as a light meal, or something that is constructed like or has the form of a sandwich.

When some difficult information must be brought to the other person, a complaint about something that is not working, a helpful guideline is to have a sincere acknowledgment on both sides of the difficult message. The difficult part is the sandwich filling, with positive messages on either side holding it like bread holds the filling. Here is an example from a couple who learned the hard way, that they had better hold the filling together with some strong sides or that things would be sure to fall apart.

There is usually one partner who pays closer attention to the financial well-being of the family. In this case, it was Graham who was the saver and his wife Rebecca was the spender. Graham developed a concern about their budget being overrun, but in this conversation, he was on his best behavior to set a context that could lead to a productive outcome. He had learned through painful arguments, that if he started the conversation with accusation and blame, that the fights did not produce a positive outcome. Because there had been so many tension filled arguments in the past about money, Graham had learned some of the things that encourage success. He was ready to use the sandwich approach.

He started by respectfully asking Rebecca if this was a good time to talk, securing agreement from her rather than launching into his concern. Graham had discovered that getting agreement first is enormously helpful for getting off to a strong start.

Graham: “Thank you for sitting down to talk with me about our budget. I acknowledge that I am sensitive to over-spending so we don’t have any excess to add to our retirement account. I’m anxious because we are going to miss our agreed upon deposit. Can I show you to figures?”

Graham is speaking about his own feelings rather than blaming Rebecca for excessive expenditures. Again, he is asking for her agreement before he keeps going with his concerns. After Rebecca nods, he takes out the computer financial report indicating the inflows and outflows for the month. It is clearly uncomfortable for both of them to see the figures. They both take a moment to experience the disappointment that there wasn’t excess from expenditures to put into the savings account. They are taking their conversation nice and slow.

Rebecca: “I admit that I made some purchases that could have waited for a later month when there wasn’t the big expense for car repair. Thank you Graham for preparing for this financial meeting by getting the computer report ready to show to me so that I can see how much I need to tighten my belt. I am committed to compensate for the excessive spending and make up for it in the next few months. And I do appreciate your keeping such a close eye on our finances because you know that it’s not a strength of mine.”

Rebecca was able to take responsibility for her part in the shortfall because she wasn’t feeling accused of wrongdoing and could formulate a plan with her husband that would work for both of them. She is finding something to thank him for to maintain the positive approach to the challenge, reaffirming her commitment to saving, and offering a creative solution.

Graham: “I’m glad that you join me in keeping a close eye on our finances. It’s so important to me that I don’t feel alone trying to manage our spending and saving. I know that it doesn’t upset and worry you as much as it does me, and that meeting with me to hear my concerns means so much to me. I know that paying close attention to money isn’t your strength but a strength that you do have is that you are honest. So that when you give me your word about being more careful with money in the next months, I can trust that you will do just that. We have had many other challenges over our years together, and have achieved success in other areas. When we line up our two commitments, we achieve our goals. I don’t see why this financial goal should be any different. We can do this.”

Graham is feeling much better that he has been able to express his concern and no longer feels alone with the distress over the lack of a deposit in their retirement fund this month. They are able to wrap up what might have been an ugly argument with a feeling of triumph. They both feel a sense of confidence that they have leaned what they need to learn out of the discussion and will go forward untied in their intention to save more in the future.

The positive approach in the beginning set a tone that was conducive to co-operation rather than an adversarial attitude. There was some discomfort as they faced the truth about their present financial situation. But were able to leave the discussion with a plan they could both get behind and an optimistic feeling of confidence that they could succeed. Would you like to try out the sandwich and find out from your own experience if it is nourishing?