Therapists Hold Myths About Therapy, Too 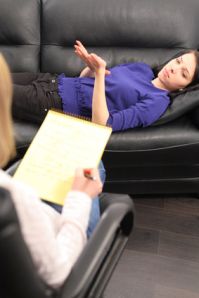 Before they first walk through the door, clients are usually clueless about how therapy works and what it actually looks like. Which is absolutely understandable. Film and television often distort therapy and paint therapists as caricatures. Plus, because therapy is very personal and confidential, details are hard to come by.

But clients aren’t the only ones who hold misconceptions about therapy. Therapists do, too. Below, various therapists share the assumptions they held—and the truths they learned.

Right after John Harrison, LPCC, received his degree, he realized that what he learned in graduate school wasn’t going to make him a good counselor. In fact, he felt underprepared—a feeling that many new therapists have. That’s “because grad school can’t teach you how to connect and relate with people in the truest sense,” said Harrison, a counselor and coach who specializes in working with individuals and couples.

He’s learned that being an effective therapist is learning with his clients, not leaning solely on therapeutic techniques. “Showing up as another human and ‘holding space’ for them in a non-judgmental way is the heart of therapy.”

Harrison further noted that therapy isn’t about having answers. “It’s about connecting and supporting someone exactly how they are, where they are. Holding that space with another person and exploring the unknowns and potentials with them. Helping them do their own work, not doing something ‘to them.’”

Psychotherapist Colleen Mullen, PsyD, LMFT, also learned that therapy is truly about the relationship between client and clinician—instead of the therapist being “a blank slate who shows up, listens and then goes home.”

“[T]he genuine nature of our interactions helps the client feel cared for, which allows them to feel comfortable to be vulnerable, which allows them to make the changes they seek to put in motion,” said Mullen, founder of the Coaching Through Chaos private practice and podcast in San Diego.

When appropriate, Mullen shares personal stories, in small doses, with her clients. This helps to dispel common assumptions that because she’s a therapist, she somehow has everything figured out, and has flawless relationships.

“When I share a bit of myself, my clients understand that I truly am there to support them—not from a position of being better than them; I just have what could be helpful information for them.”

Psychologist Susan Orenstein, Ph.D, who specializes in couples counseling, originally believed that if she learned enough, trained enough and was clever enough, she’d be able to save all marriages. “I used to feel like a failure any time a couple I had been seeing decided to divorce. But over the years, I’ve learned that some people can’t find their way back to love or never had a strong relational foundation in the first place; some couples trigger each other and I watch their nervous systems collide. And I’ve even had couples hug me and thank me for helping them face their truth, even when it means saying goodbye.”

When Orenstein’s clients decide to end their relationship, she helps them “let go with compassion and dignity so that they can move forward and find fulfillment and love again.”

Clinical psychologist Dean Parker, Ph.D, assumed that people seek therapy to create changes for a happier, more authentic life. “However, what I found was that people come into therapy with two agendas: not to change and to lie.”

“Most people arrive at a therapist’s office for the first time in acute emotional pain and want it to stop and to just feel better,” said Parker, who specializes in depression, anxiety, stress, addiction and relationships. [C]onsciously or not, [they] often lie to themselves, their friends, their family, and their therapist to try and alleviate the pain. They simply do not want to face the causative factors of their pain, the impact it has on others, and the impact their behavior has on others.”

For instance, years ago, Parker was working with a woman who struggled with severe panic attacks. They worked on relaxation exercises, coping statements and mindfulness techniques. But she wasn’t getting better.

After they discussed her triggers and past, it turned out that she hadn’t grieved the sudden loss of a parent, which happened 10 years prior. She told Parker that she’d handled it surprisingly well and moved on. But this wasn’t true.

“Once we addressed in detail the pain of the loss and the dramatic impact it had on her, she showed dramatic improvement,” Parker said. “The cognitive and behavioral techniques that were not working before suddenly became effective. Facing the truth of her pain was the key to her psychological well-being.”

“When I first started out, I thought there was a certain way to do therapy that could work for everybody,” said Melanie Greenberg, Ph.D, a clinical psychologist in Marin county, Calif., and author of The Stress-Proof Brain. However, she realized the importance of adapting one’s approach and style to each client. “It is important that you hear what the client wants and begin there. Being heard and having a say in how things are done is empowering to clients.”

For instance, she said, some clients need to develop a trusting bond with her to lay the foundation for change. Which means providing a lot of emotional support and presence. “They may be frightened to give up old patterns that seem dysfunctional, but are familiar and comfortable.”

Other clients prefer a structured approach that outlines their goals and the tools for accomplishing them, Greenberg said. “Once they experience some credible changes, they may be more willing to slow down and explore feelings.”

Some clients prefer to focus on present stressors, while others want to explore childhood pain, she said. “Many clients grew up feeling powerless, not seen and not heard. Therapy needs to be a corrective experience in which their needs are honored and respected.”

And that is precisely what’s so powerful about therapy: It is a way for each of us to feel seen, honored and heard.

Check out last month’s piece, where other clinicians revealed what they assumed was true about therapy but really wasn’t.