Therapists Spill: How I Faced My Fears 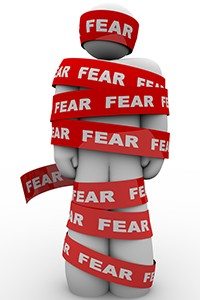 But while therapists do have a deep understanding of fear and a range of effective tools to deal with it, they still experience it. Because fear is human. Because everyone experiences fear. Everyone worries. Everyone struggles. We don’t vanquish or eliminate fear—which comes in all shapes, sizes and stripes. Below, five therapists reveal how they faced their fears—big and small.

For therapist Laura Reagan, LCSW-C, starting her podcast “Therapy Chat” was terrifying. “[I] was putting myself out there into the world. [I felt] as if I am asking the world ‘do you like me?’ I’m afraid the answer will be ‘no.’”

At first, she got through it by telling herself that no one would be listening. It took her some time to acknowledge that she actually did want people to hear the podcast. “I felt I had something to say. It was time to stop hiding. I had to reconcile the fact that people might not like it, and I was able to reason that I don’t like everything other people do either. But that doesn’t mean their work lacks value. It was challenging to recognize that it is OK for me to show up in the world, even though it means opening myself to judgment and criticism.”

Reagan’s reward for doing the podcast far outweighs the discomfort: She’s able to help way more people than she can in her private practice, one on one.

Marriage and family therapist Ashley Thorn also had similar fears while trying a seemingly small act: wake boarding on a family vacation. “I’ve always been known in my family for being a ‘chicken,’ especially when it comes to sports type things. And honestly, it wasn’t so much the fear of wake boarding—it was the fear of failing at it or embarrassing myself and getting made fun of.”

What helped was telling herself that whatever happened, she’d feel proud for trying. She also did some research on wake boarding. Then she took a deep breath, and went for it.

“I didn’t turn out to be a professional wake boarder, but I wasn’t bad at it either. And, it felt really good to do something that was unexpected of me, and something I had always told myself I couldn’t do because I was afraid of it. That little experience has since given me the confidence to push myself more, try other new things, and gain new wonderful, meaningful experiences that I wouldn’t otherwise have.”

Psychotherapist Lena Aburdene Derhally, LPC, has always loved performing, but stand-up comedy scared her. When she was pregnant with her second child, she finally decided to try it, because she knew she wouldn’t have the time with two little ones (“I was right about that!”).

“I signed up for a stand-up comedy class and performed a 5-minute routine at the end. Although it was terrifying, it was exhilarating and I was so proud of myself and had so much fun with it. I don’t regret it at all and in fact, I often find myself very happy when I do things that scare me. Leading up to it may produce anxiety but afterwards is always a reward.”

Psychotherapist Chris Kingman, LCSW, has found that fear often lives in ordinary moments and arises during interactions. In the past, he viewed his feelings of fear as flashing lights to retreat. Today, however, he sees them as opportunities to delve deeper, to “advance into more complex and more emotional territory”—whether this is with his clients or personal relationships. “In other words, my fear reactions in the past were barriers to emotional intimacy whereas nowadays they are doorways into deeper emotional intimacy.”

In the summer of 2009 psychologist Ryan Howes, Ph.D, like many of his colleagues, saw a significant drop in clients. Because of the 2008 crash, many people simply didn’t have the money for therapy. “I spent many hours in my office, the hours I recently spent providing treatment, crunching numbers and fretting about my career.”

However, after running into an older and more experienced therapist, who shared some wise words, Howes’s perspective shifted. “I was spending all of my time sitting in fear instead of doing something to actively help my situation, or just to find some joy in the days. So in my large chunks of down time, I set up coffee meetings with people in the community to build relationships, I started writing more, and I spent more time exercising—all things I had previously said I wanted to do, but never got around to.”

Thanks to the improved economy, Howes’s newfound relationships and his better online presence, his practice started thriving, again.

Howes learned that while fear tends to paralyze him, pushing through it and taking constructive action sparks a significant attitude shift. He also learned that perspective is everything. “The more experienced therapist can see and trust the waves in his practice, while I felt it was dropping off a cliff. I just hope I can hold on to that same perspective the next time the waves roll out.”

Fear is universal. Often the fear isn’t even about the actual act. That is, it’s not that we fear giving a speech, sharing an idea or confronting someone, for instance. What we really fear is the potential rejection, failure, embarrassment and humiliation. And therapists fear this, too. Because these, too, are universal. They are what makes us us.