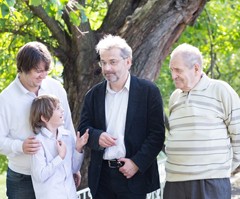 Therapist: “When else have you felt rejected?”

Jason: “I remember when I was five years old, some of my Dad’s friends were over. I remember telling them about a joke I had just read. I thought it was so funny. I went on and on about this chicken and goat and they all listened very patiently. And when I got to the end, there was no reaction. They just went on talking where they had left off. I felt so stupid and embarrassed.”

Therapist: “What was the most embarrassing thing about it?”

Jason: “Not only was I stupid, but it was obvious to everybody that I didn’t even know how stupid I was.”

Therapist: “You felt inferior and rejected. What did you learn from that event?”

Jason: “I thought I was doing something good at the time — that I was sociable and entertaining, but I was dead wrong.”

Therapist: “You learned that your judgment wasn’t good enough.”

Jason: “I’m still having trouble with that. I keep trusting the wrong people, and not trusting the ones I should trust.”

Therapist: “Does it make you angry?”

Therapist: “When you had that argument with your girlfriend Sue at your friends barbecue, did you feel there was something wrong with your judgment?”

Jason: “Yes. It was my decision to invite her to the party. I see now that it was a mistake, but I wanted them to get to know her and vice versa and have a good time together.”

Therapist: “What did you do to get over this anger at yourself for having such poor judgment?”

Jason: “Nothing I guess.”

Therapist: “We don’t have room in our conscious mind for all these feelings from our childhood, so they slip below the level of conscious awareness. But they are down there, just the same, predisposing us to lash out with exaggerated emotional reactions. Now you can begin to repair the damage and make other choices.”

Jason: “What was the damage?”

Therapist:”The damage was to your self-respect. You would not respect a child who was so foolish as to believe that grown-ups would be interested in his fairy tales. You could not respect anyone who had such poor judgment. You could only be angry at yourself for letting your judgment betray you. Didn’t you feel like you were the victim of this betrayal?”

Therapist: “You are vulnerable to blaming yourself for your own victimization, which also compounds your distress in the present. You cannot respect victims. Let me ask you another focusing question. How else do you feel when people do not appreciate your efforts to amuse and entertain them?”

Therapist: “So who were you angry at?”

Jason: “I was angry at her for not appreciating what I was trying to do for her.”

Therapist: “What angered you the most?”

Therapist: “And unfairness makes you angry doesn’t it? Who else were you angry at?”

Therapist: “Could it be that you were angry at yourself for being helpful to Sue in the first place?”

Jason: “I thought she would appreciate it, but I was wrong.”