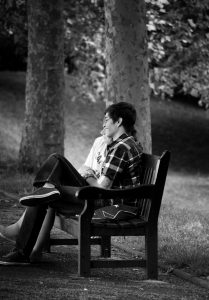 Linda: It is all quite experimental, this learning to communicate well with our partner. Far too many of us came to partnership with inadequate models of communication from our families. If we dedicate ourselves to learning the skills of effective communication, we can master them, but it takes commitment, time, effort, patience and creativity. Consider the challenge that Raz and Liza faced when they caught themselves in a popular pattern of Raz being the emotionally cool one, placing emphasis on the facts. His rational approach only made Liza more emotionally distressed, not less, until they observed the painful pattern and tried a new approach.

Raz: “I’ve probably learned more about communication from my marriage with Liza than I’ve learned from all of my jobs and formal education put together. Those lessons have been powerful, but at times also painful. One of my strengths is that I’m generally able to remain pretty cool and collected in conversations, even when they get really heated. I’m the guy that doesn’t lose his head, even when those around me are losing theirs. I’ve always been able to pretty much control my emotions so that they don’t get in the way of my rational thinking, and I can generally reason my way through most situations.”

“I learned that there are times that it isn’t necessary or even desirable to win the argument, and that not winning doesn’t necessarily mean losing. During the first few years of our marriage, I used my debating skills to try to outwit Liza whenever we got into an argument. Since we both tend to be pretty strong-willed people, that was not an infrequent occurrence! Liza is a much more emotional person than I am. Unlike me, she doesn’t tend to live in her head, and she is very connected to her feelings and she expresses them spontaneously and freely. I have always been more deliberate and guarded in what I say and therefore tend to be more logical and rational in conversations. Early on when Liza and I would get into arguments, there would be raised voices and interruptions on both sides, but I could almost always out argue her and remain cool and collected while I calmly pointed out how illogical and unreasonable she was being. The more logical I got, the more emotional Liza would become until she eventually would just get hysterical. These disputes would end with Liza in tears feeling defeated, leaving me with a hollow victory because she was so lifeless in her defeat. The negative energy could remain between us for days.”

“When our daughter Marissa was six years old, I began to notice that I had a very different way of being with her when she was hurt or upset. I was always sweet and patient with her. When Marissa was hurting, I wouldn’t talk much to her at all. I would just hold her in my arms and try to comfort her until she quieted down and felt better. Then she would just get up as if nothing had ever happened and return to whatever she had been doing prior to her upset. It suddenly dawned on me one day that there was a vulnerable little six year old inside of Liza who didn’t need to be argued with or convinced about anything. She just needed to be loved. I realized that being a champion debater was a dubious honor in my marriage. It certainly wasn’t bringing me closer to my wife. It was at this point that I learned to be emotionally flexible with Liza.”

“I was committed to bringing this insight into our marriage and found that with my newly found determination to be a more loving husband, I was able to gradually overcome my decade long pattern of verbal manipulation. I don’t need to win the arguments and defeat Liza any more, and I don’t want to. We both lose when I do that. Nowadays, when I become aware that I have done or said things that are hurtful or disturbing to her, I just tell her “I’m sorry I hurt your feelings.”

Liza: “Our love for each other is very strong, and that was a powerful motivator to find a way to deal with this ghastly pattern. I realized that when I simply told Raz that I felt lost, it would be a powerful cue for him to slow down to observe what he was doing. I tried a lot of things to change the pattern. I tried winking at him; sometimes I kicked him under the table. The bottom line is that we were both committed to getting past this cycle. It’s just excruciatingly painful when we are disconnected. The pain we experienced when we hurt each other was the motivator do redouble our efforts to try a new strategy. One of the things that helped us the most was our willingness to sit down after a stressful interaction and really look at both of our behaviors. The question that we addressed was, “What happened?” We were completely committed to each other and our future together, so we had the fire in the belly to address each breakdown to learn more about ourselves. We found that it got easier and easier over time to handle any differences and disagreements.”

I love the detail in their story that Raz learned from his six year old daughter, a different approach that made a huge difference. These two were able to be experimental and that made all the difference in being able to find a method that worked for them. Sometimes we have to suffer through a period of failures to find the motivation to do it differently, and then we can break through to a method that works for us so that love can pour through abundantly without interruption.