What I Learned From My Daughter’s Drawings 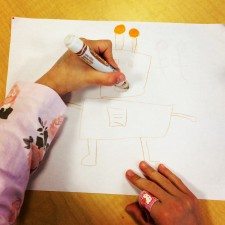 My daughter drawing a robot for her Daddy.

A unicorn standing in a field of butterflies.

A fairy jumping off a dock into a mountain lake.

Two boys and two girls and a monkey playing football.

If you asked me to draw any of these scenes, my reaction would be something along the lines of, “Of course not. I’m terrible at drawing!”

But if you ask my six-year-old daughter to draw any of them, she’ll grab some markers and paper and get right to work.

While I like to think she’s a rather good artist, the reality is that she’s probably just about as good as you might expect a six-year-old who draws a lot to be. And I believe that her drawing skills have little to do with her willingness to draw just about anything.

So how did we get to this point where I judge myself so harshly and shy away from most drawing challenges while my little girl jumps right in?

I can think of three relevant factors:

She’s not thinking about “perfect.” My inner landscape is rife with images of perfection. Sometimes I have a very specific idea of what perfect looks like, often based on photo-shopped images or carefully doctored Pinterest pages. Other times “perfect” manifests as a vague but certain sense that I can’t do it—whatever it is—and if I try, it won’t be good enough. Either way, if I think I can’t get something perfect, I’m unlikely to try at all. My daughter doesn’t have this image of perfection looming in her mind, making her doubt her abilities and stick to what she knows. I know the measuring stick of perfection will become part of her perspective soon enough, but I’m trying to keep it at bay for as long as possible by focusing on how hard she works as opposed to the quality of her drawings.

She’s got a growth-mindset. This is something my husband and I have been working on since we became aware of Carol Dweck’s research on the difference between growth- and fixed- mindsets. Fortunately, our daughter’s school is very committed to this concept as well. The very short version of this is that when children are taught to value hard work over success, they’re more likely to try new things, take risks, and bounce back after a failure. If they’re too hung up on getting things right, they’ll be less likely to do all of those things for fear of making a mistake or failing.

When my daughter shows me one of her drawings, I no longer tell her that it’s good, and I don’t tell her she’s a good artist. Instead, I ask her questions about what she drew, and I comment on how hard she worked. Rather than praise, she gets attention from me and feedback about the value of her efforts. And when she does scribble out something fairly unimpressive, I’ll let her know. “I don’t know,” I’ll say. “It’s not my favorite. It doesn’t look like you worked very hard on it.”

She sees failure as part of the process. This is a perspective that I’ve tried to teach my daughter with very little success, mostly because I am still trying to get my own mind around it. Fortunately, she’s learning it in a variety of ways at school. First, her teachers talk a lot about how to make a Beautiful Oops! They took the idea from a lovely book by the same name which all about how to turn a mistake into something beautiful. Second, in her engineering class (Yes, my kindergartner goes to an engineering class. It’s awesome.), she was taught to expect that her first creations won’t work properly, and that’s not a bad thing. It’s just part of the process of learning and doing and making and figuring things out.

To be sure, my daughter isn’t perfectly fearless or consistently resilient. She’s scared of many things, and she does get frustrated. But when it comes to drawing, she’s unstoppable. I love that about her, and I’m trying to learn from her whenever I can. Even if that means making some truly terrible drawings.