When You Have Thoughts or Worries About Your Own Mortality 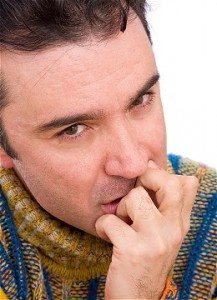 Imagine you are in a white room. Use five adjectives to describe the experience. Write those adjectives down. Don’t censor yourself. Don’t erase, scribble out or delete. Jot down the first five words that come to mind.

This is the last part of a personality test that Rachael Morgan, an art therapist and licensed professional counselor, casually gives to friends. It’s a test that was passed on to her by a friend who also got it from a friend.

The white room actually represents our thoughts about death (which can be subconscious). According to Morgan, the white room might reflect these thoughts because “it is a blank slate—we get to project whatever thoughts, ideas, feelings, beliefs and symbols onto it.”

Many people start worrying about their own mortality after experiencing a loss. Maybe you lost someone close to you—a parent, a partner, a sibling—and you’re acutely familiar with the fragility of life, including now your own.

Psychologist Karin Lawson, PsyD., noted that any transition can get us thinking about death: moving, marriage, divorce, aging.

It also can depend on your personality. “We each spend time with philosophical questions and existential realities in our own ways,” Morgan said. “I think some people enjoy allowing their minds to wonder and wander, while others find it terrifying.”

Sometimes, in the hustle and bustle of our day-to-day, death isn’t on our minds—until certain circumstances remind us of our own mortality, said Sage Rubinstein, MA, LMHC, a Miami-based therapist specializing in the treatment of eating disorders, addiction and trauma. Maybe we almost get into a car accident. Maybe we’re awaiting important medical results. Maybe we recently received a troubling diagnosis. This can even include positive moments, such as a wedding or the birth of a child, or “any milestones that remind us of perhaps a self-imposed ‘timeline.’”

Sometimes, thoughts about death come up unexpectedly. Lawson shared this example: You’re at the Grand Canyon and the thought “I could jump off this cliff” pops into your head. Which makes you feel very unsettled, sparking a slew of anxious thoughts: “I can’t believe I would think such a thing! Am I suicidal? Why would I think of anything so dangerous? What’s going on with me? Am I going crazy?”

Even though we’re horrified about the initial thought, we keep thinking about it, which, again, inevitably triggers more anxiety—and over time, “the original off-the-wall thought and anxiety become associated with each other.” Since neurons that fire together, wire together, this creates a pattern, and any time we have a random thought, it’s followed by anxiety, Lawson said. (Thankfully, we can create new patterns.)

What can you do about these worries?

According to Lawson, in the past, the preferred strategy was to distract yourself from distressing thoughts. But this creates a “push-pull and really sends a message that the thought isn’t OK and that you need to get away from it.” What’s more helpful, she said, is to remind yourself: “A thought is simply a thought, an electrical firing of a neuron. It was just a hiccup,” and “Thinking something does not make it true and will not cause it to happen.” ​

In the Grand Canyon example, you acknowledge that you don’t want to jump off the cliff, and the thought doesn’t reveal some deeper meaning—since the thought initially alarmed you, Lawson said. “You remember that everyone has off-the-wall thoughts sometimes and this was one of those bizarre, goofy moments.”

Similarly, Morgan believes that one of the best ways to approach these worries is to question our thoughts—versus taking them at face value. She’s a big fan of Byron Katie, whose work focuses on “challenging our thoughts about what we think we know, but we really can’t know.” Katie’s work, Morgan said, is similar to the idea of the white room. It includes asking ourselves these four questions: “Is it true? Can you absolutely know that its true? How do you react, what happens, when you believe that thought? and Who would you be without the thought?”

“If our thoughts about death are causing distress, following up with these questions can illuminate that we are actually causing our distress, because the thoughts can’t really be proven absolutely true.”

Rubinstein suggested practicing radical acceptance since death is, after all, inevitable. “Radical acceptance is an existential and dialectical behavioral therapy (DBT) principle in which one stops fighting reality in order to reduce the suffering they experience around an entity they cannot control,” she said. That is, you accept that you can’t control the when or how of your mortality. And you refocus on what you can control—which is a lot. Rubinstein shared these examples: You can seek comfort in spiritual or religious beliefs; carve out time to practice habits that nourish you; and prioritize your values to ensure you’re actually living by what’s important to you.

According to Morgan, another powerful way to reduce our anxiety is to stay in the present moment. Which we can do by meditating, moving our bodies and engaging in creative activities, she said. “We can focus on our breath. This is the exact opposite of death.”

You can refocus on right now, on anything: “the TV, the sunset, the pet at your lap, the vacuum cleaner, the emails,” Lawson said.

She also stressed the importance of seeking professional help if: “it feels like you’re spending a fair amount of time and energy thinking of death, including ideas about how to die, with means and a plan to put them in place”; you’re having anxious thoughts and are engaging in time-consuming rituals or tasks to protect yourself or others; you’re anxious about death-related thoughts, which feels overwhelming and interferes with your day-to-day life.

Lawson specifically recommended looking for therapists who practice existential psychotherapy, acceptance and commitment therapy (ACT) and/or cognitive behavioral therapy (CBT). “In particular, an existential or ACT therapist can really help support a process of reflection and meaning-making if you find yourself in a phase of life that is bringing death up more and more. A CBT therapist can really support intrusive, disturbing thoughts that may be secondary to conditions such as obsessive-compulsive disorder.”

It’s absolutely understandable to feel anxiety around death. For some of us, it’s the white room of the unknown and unknowable. It is utterly uncertain. And that can be scary. Again, if your thoughts about dying are upsetting you, don’t hesitate to make an appointment with a therapist.

Lawson often recommends Dr. Irvin Yalom’s writings to her clients, along with the 2017 book Overcoming Unwanted Intrusive Thoughts: A CBT-Based Guide to Getting over Frightening, Obsessive or Disturbing Thoughts by Sally M. Winston, PsyD and Martin N. Seif, PhD.

Rubinstein also suggested Yalom’s book Creatures of a Day. “It is an inside peek into the various ways we can conceptualize death, our mortality, and what it is like to be vulnerable with another person about some of our deepest fears.”