The Fatherhood Collaborative of Hamilton County 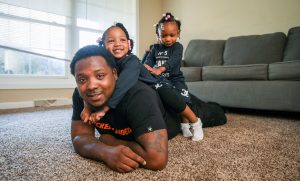 Being a single dad: Jamel Kirk.

This is a story you don’t hear often. It’s about a young man who unexpectedly finds himself a single father raising two little girls and doing a good job at it.

The life jolt Jamel Kirk didn’t expect has become his greatest blessing. And he hopes it set him on a path to be a good role model for not just his girls, but for other dads too.

“I’ve had other fathers come to me and ask me what I did to be able to see my kids, to get my kids,” he said. “A lot of them don’t know what they can do. I tell them you have to make that decision to go (to court) and do what you need to do. They love their kids just like I do.”

Kirk, 26, is a member of the Fatherhood Collaborative of Hamilton County. He and other dads talk and support each other at monthly meetings. He’s a great example of both how the collaborative can help and also how dads can help each other.

His older daughter, Amber, was already living with him when he got the call about her baby sister needing a place to live. The girls are 3 and 20 months now.

He filed a private petition for custody that remains pending in court. He lost his job during Covid-19, but recently started a new one at a store near his apartment. He hopes to enroll soon in Cincinnati State’s culinary program.

The collaborative began in 2012 with the Cincinnati Human Relations Commission, but went dormant in 2016. Hamilton County Job and Family Services relaunched it in 2019 with the mission of creating and sustaining “community consciousness, conversation and action on the needs and aspirations of fathers and their role in the development of healthy children and families.” The collaborative celebrates its inaugural awards ceremony Friday.

Calvin Williams, JFS fatherhood coordinator, praised Kirk for his dedication to his girls and for his willingness to stick with being a single parent even though it can be difficult.

“Jamel is a good example of what we don’t readily see or acknowledge in our community about fathers, particularly low-income fathers, but that is nonetheless the norm,” he said. “And that is a father willing to go through anything to provide for, protect and raise his children.

“There he was, 25 years old at the time, stepping up to be a full-time dad to his then 8-month-old and 2-year-old daughters when dire circumstances demanded that he do so…Over the past year, I watched him put everything in place for his girls to thrive.”

When Williams first was contacted about Kirk last winter, he contacted agencies and supporters of the Fatherhood Collaborative to find help. Within 24 hours, 11 agencies and programs responded with offers. The group got Kirk approved for PRC funds through JFS to get his truck fixed. But when the repairs were more than the $3,000 limit, Kirk had to show that he had the remaining $800. His mother’s church stepped up with that. Once the truck was fixed, he was able to work.

Kirk also found support from a JFS manager, Kenwood Lattimore, who worked with Kirk for several months in a mentoring role. He credits his mom for helping out a lot too, and also has support from a ProKids court-appointed special advocate (CASA).

“We’ve recognized that we can do more to support fathers and their critical role in the family,” said Michael Patton, JFS assistant director for fatherhood initiatives. “Having the Fatherhood Collaborative as an initiative of JFS sends a message that our organization wants to serve all family members and acknowledges that fathers play a key role in maintaining healthy families.”

Kirk loves to cook. He proudly shows off photos on his phone of his homemade meals. He thinks his salmon and pasta is really good. But ask the girls what they like best and Amber says: “Mac and cheese.” Kirk just shakes his head.

He hopes telling his story helps other dads. That’s why he attends the fatherhood collaborative meetings – to find support for himself, but also to provide advice and encouragement.

“Everything happens for a reason,” he said. “I have a job. I have my kids. I feel peaceful.”

To reach the Fatherhood Collaborative – email Calvin.Williams@jfs.ohio.gov
The format and/or content of this post has been edited to fit guidelines of the Cincinnati Chapter of United Resource Connection for this rebroadcast.