Driver’s Licenses for Undocumented Residents in the United States 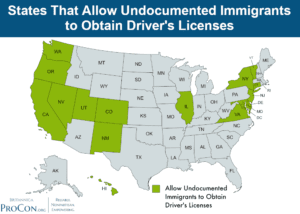 Traffic court can result in a question of citizenship for folks that don’t have a driver’s license, if they happen to be latino. This is a hardship on the Latino community in much the same way that “stop and frisk” has been on African American communities. Technically any one of us, including “white” residents of the U.S., who do not have the new Federally Compliant “Real ID” could be charged with being undocumented until they show their birth certificate to an accuser. And yet, how many of us carry their birth certificate to work with them every day? The fact that latinos are subjected to the test more than whites provides an additional hardship to that community just because of their color. This hardship is perpetuated by using the term “illegal” for folks that are innocent until proven guilty under U.S. law.

Under the U.S. Constitution, States are allowed to have different requirements for issuing a driver’s license. There are many states that have alternatives to providing a social security number when getting a driver’s license. Most of them allow you to get a driver’s license if you provide a statement from the Social Security Administration (SSA) that you are “ineligible for a social security card”. This requires admitting that you don’t have a birth certificate or other documentation proving you are a U.S. citizen, but the SSA does provide this statement for tax payers.

Sixteen States and the District of Columbia have enacted laws specifically to allow unauthorized immigrants to obtain driver’s licenses. These states are California, Colorado, Connecticut, Delaware, Hawaii, Illinois, Maryland, Nevada, New Jersey, New Mexico, New York, Oregon, Utah, Vermont, Virginia and Washington. Ohio isn’t on this list, so a resident of the Greater Cincinnati Area who doesn’t have a Social Security Number would need to travel to one of these States to get a driver’s license for use in Ohio. Illinois, Virgina, Maryland, and New York are the closest. Details of the requirements to get a driver’s license in these States can be found online in several places, including the licensing bureaus of each of those States.

The most “open” State is Nevada, which allows applicants, regardless of legal status, to provide birth certificates or passports issued by a foreign country as proof of identity. This law also prohibits the release of information relating to legal status for purposes relating to the enforcement of immigration laws. New York State also restricts what information can be retained and given out on those applying or holding licenses.

The illegality of someone residing in the U.S. is a matter of law, not public opinion. As such someone uncharged by the court is properly identified as “undocumented”, i.e., they are not carrying their birth certificate on them, or other form of proof that they are a U.S. citizen or approved visitor. Such a person is not “illegal” until a U.S. Court finds them guilty of breaking our residency laws.